Big George takes a critical look at what seems to be the only game in town: solitaire.

Here's something to think about. If you compose the music yourself, play all the instruments, then produce and master it on your own, is it any wonder if you're the only person in the world who likes it? And before you start pleading that friends, family and work colleagues think you're great, remember one thing: no one wants to hurt your feelings! Think of how many blank CDs are sold that aren't used to illegally copy established artists. Is the manufacture of these discs a tragic waste of the world's resources, plunging us at 200rpm towards global oblivion (that's how fast a CD spins), or a justified excess destined to guarantee the future delight of an eager world of music lovers? 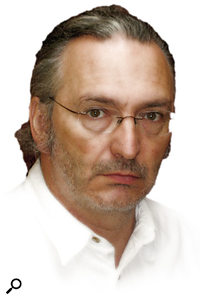 When Edison shouted 'Mary Had A Little Lamb' into a cone, late in 1877, to create the first recording ever made, he was surrounded by a team of contributors and investors. They all played a part in this crucial entry into the history books. Who were they? Who cares — but without them this historic event would not have been possible. Collaboration is how the recording process started, and that's how it stayed throughout the entire 20th century (with a few isolated exceptions — and we're talking of an infinitesimal number here ).

So if it's been good enough for just about every recording ever made, what makes you so special?

One of the greatest records I ever owned was a version of 'Teddy Bears' Picnic'. It was a 78rpm disc recorded in the 1940s which, due to the fragility of its shellac format, eventually smashed, leaving me heartbroken. The reason why this silly song was such a Big George favourite (and a practical lesson in always backing up your stuff, whatever medium it's recorded to) was down to the performance. As with all music sessions for the first 70-odd years, it was recorded live, direct to disc. During the vibraphone solo, whoever was doing the hammering made a slight mistake — nothing that couldn't be fixed in the mix. Mind you, back then they had no notion of what a 'mix' was...

Now, it wasn't the mistake that excited me — although I do love mistakes on records (in fact, feel free to send me your favourite cock-ups on record and we'll list the best in the magazine some time later this century). No, the fabulous thing about the track was that, because of the way it was recorded, there was no opportunity to drop in and repair the bum note. If they'd stopped, they would have wasted a disc, so the band played on regardless, as most probably hadn't even noticed the fluff-up. But the virtuoso vibraphonist (whose name is surely lost in the ether, along with any chance of me ever hearing the recording again) knew, and went crazy, ending up ripping the song apart with a dazzling display of ding-dong dexterity, played with an audible embarrassed grin. They pressed it! Why not? The arrangements were sorted before a note had been played, the musicians were in tune and it was just a stupid novelty song, for heaven's sake! It started and finished, and the only thing the explosive solo did was to knock the whole band off their regimented perch and into a gleeful groove.

Nowadays, so much music is made up as it goes along. It usually starts with a loop or a synth patch, followed by hours spent on humanising the quantised hi-hats and flat-lining the compression. But where's the art? Where's the idea? Where's the vision? Computers have brought us recording luxury that even the most imaginative of us couldn't have dreamed of 20 years ago. As many tracks as you want, hundreds of processors dedicated to each track, the ability to cut and paste any sound that's ever been created and to elasticate loops with a single click. But is the price we've paid the loss of creativity, of performance, of danger? As someone who's busy doing loads of things in order to avoid getting a job, I am sent between a dozen and hundreds of albums every month. I listen to them all (admittedly, if there's 15 tracks and the first three are dreadful, I might whizz through the rest, but I do listen). I'd say that at least 75 percent fall into the ill-thought-out, half-cocked category. As for the other quarter, they're mostly just terrible.

Never Mind The Quality, Look At The Box

The industry is exploding with potential contributors and the avenues of opportunity have never been so many. Sadly, on whatever level artistic contribution is judged, it is without doubt the most unadventurous period in recorded history. Too many people with half an idea are spending too long on the packaging and not enough time caressing the gift of music. So next time, before you leap blindly into the sequencer, take some time to work out what you're going to be recording, bar out the structure on paper, write down the levels of instrumentation, think about how the song will end up (chances are it won't, but having a direction to start with is a great way of ending up somewhere, as opposed to going nowhere). Also, get people to contribute (as well as putting yourself up for contributing to other people's music). And don't get stuck for hours on small details. Bashing it down and tarting it up later is far more rewarding than spending time with a microscope looking at the dry/wet mix of the snare reverb. Right, I'm off to my bedroom to quantise the tambourine I sampled myself playing earlier (he says, tumbling from his moral high ground).