If recording studios were viewed the same way as wine, 1958 would be seen as an exceptional vintage. Not only did Sunset Sound and United Recorders (today Ocean Way Studios) in Hollywood open their doors that year: so too did an influential counterpart on the East Coast of the United States. And, typically for a studio founded in this era, Criteria owes its origins to the ideals and the business sense of a single entrepreneur. 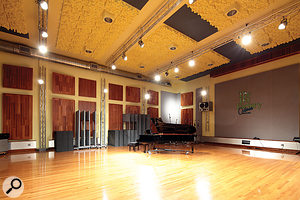 The Studio A live room offers enough space for a 72-piece orchestra. Emerman decided he was not a good enough musician to pursue his career as a trumpeter any further, he started to record jazz groups in local venues, and, much like Rudy Van Gelder in his early days, from his parents' home. After a few years it was time to put his endeavour on a more solid footing. Emerman purchased a building in North Miami, close to the local TV station, and in 1958 the first studio of many to come in this location was ready for operation. Around the same time Mack Emerman crossed paths with Jeep Harned, who would later found the console and tape recorder manufacturer MCI. Harned modified and improved Criteria's original all-valve console, and soon enough, worldwide hits began to emerge from Criteria — which is still probably the largest and busiest recording venue in the South East of the United States. James Brown's classic 'I Got You (I Feel Good)' was recorded at Criteria in Spring 1965, earning the studio the first of over 300 gold records to follow in the next decades. 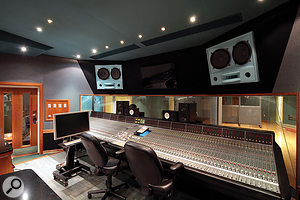 The Studio E control room is one of three that feature SSL 9000 J-series consoles. All control rooms at Criteria are equipped with custom Augspurger monitors, sometimes called 'angry duck speakers' for obvious reasons!Around the same time, Criteria landed the music-production gig for the then-famous Jackie Gleason TV show, which eventually led to the first of many expansions. A new, larger room was added to the studio. Today called Studio A, this still remains the largest of all Criteria live rooms, suitable even for big bands and 72-piece orchestras. Eventually, the great sounds coming out of Criteria attracted attention in New York, leading to a multi-faceted collaboration with Atlantic Records. Ahmet Ertegun and Jerry Wexler sent their artists to record at the studio, producing such classics as Brook Benton's 'Rainy Night In Georgia' and Aretha Franklin's 'Young, Gifted And Black', while the third member of the Atlantic triumvirate, Tom Dowd, helped Jeep Harned to refine his recording and mixing console. Later, under the MCI banner, this would become something of an industry standard. 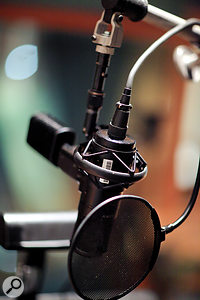 The Sony C800G valve mic is a favourite vocal mic on hip-hop and R&B sessions. Criteria's ongoing success necessitated further expansions in the 1970s, as the waiting list of musicians and labels aspiring to book time there grew longer. In 1972 Studio C was completed, followed a little later by Studio D, and a string of worldwide hits emerged from Mack Emerman's recording empire: 'Layla' by Derek & the Dominoes, Bob Marley's 'Could You Be Loved?' and 'Hotel California' by the Eagles. the Bee Gees became a fixture at Criteria, and with productions like 'Stayin' Alive' and 'How Deep Is Your Love, the studio was at the forefront of the disco movement.

However, as disco fever evaporated at the end of the '70s, so did that decade's staggeringly high record production budgets. Criteria managed to stay afloat, and the '80s brought in a new string of clients such as Julio Iglesias, Peter Frampton and Ted Nugent. The early '80s also saw the addition of perhaps the most beautiful room in the Criteria complex. Designed by John Storyk, Studio E features exquisite details like a wall of handmade Cuban tiles and a ceiling almost 30 feet high. 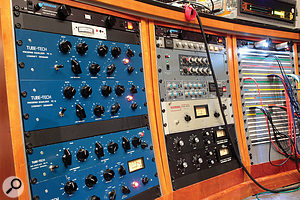 All control rooms are equipped with virtually the same selection of industry-standard outboard gear (as in Studio A, here) allowing sessions to be moved throughout the facility without technical difficulties. Criteria changed hands several times until the Hit Factory concern took over the studio in the mid-'90s, renaming it Hit Factory Criteria Miami. The entire facility has undergone numerous renovations and modernisations through the decades. None of the rooms remains in its original shape, and the first studio Emerman built in 1958 now serves as the games room, equipped with a lounge, snooker table, tabletop football — and countless gold and platinum records from Criteria's rich history. 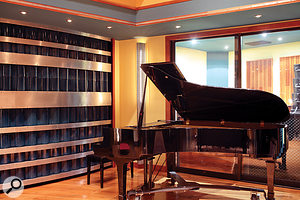 While the studios employed numerous MCI and API consoles over the years, all control rooms now are populated with desks of British origin except Studio B, which is centred around a Digidesign Control 24. Studio F boasts an SSL Duality, Studio C a vintage 40-input Neve 8078, and all the other rooms, namely A, D and E, are equipped with SSL 9000 J-series desks with up to 96 inputs. Additionally, each control room offers an outboard gear selection based on well-known industry standards such as Tube-Tech, Neve, Universal Audio and Lexicon. Rather than collecting esoteric and unusual hardware, great care has been taken to install virtually the same setup in each control room, so that sessions can be moved throughout the building without any technical difficulty. 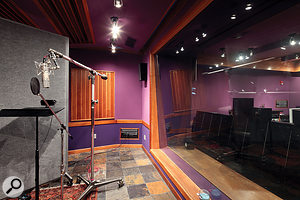 The Studio D live room today serves mostly as a vocal booth of luxurious proportions. The microphone collection has been conceived accordingly, boasting virtually all industry standards, and including coveted items such as the Telefunken ELAM 251, RCA 44BX and 77DX, and the trinity of valve-based Neumann capacitor mics: U47, U67 and M49. A microphone often used by current clients is the unusually shaped Sony C800G, which sees a lot of mileage on hip-hop and R&B sessions. Criteria has become a hot spot for so-called urban genres in recent years, with artists such as Timbaland, Jennifer Hudson, Jennifer Lopez and Ricky Martin frequently booking Criteria's rooms. Indeed, Lil' Wayne has had the beautiful Studio E booked solidly for the last for three years — and who can blame him?