One of the most remarkable new recording venues in Berlin opened its doors in 2013.

Germany’s capital is a constantly evolving city, and one which hasn’t yet arrived at the saturated state of other Western metropolises. In the 1920s, for a brief moment between two devastating wars, the city played a leading role in Europe’s cultural life, but after World War Two and the city’s division into East and West, Berlin’s creative potential lay dormant for decades. Only a few mavericks, such as David Bowie, sought out the city’s rather morbid charm in that era, and only a small number of world-class studios like Hansa and Teldex were open to the public. However, just as the entire city has become a magnet for creative people of all disciplines today, so too is the music business expanding. A focal point for the punk, industrial and electronic scenes for many years, Berlin’s ever-evolving nature has been a breeding ground for interesting musical crossovers, and new studios are opening up to provide their services to the still-growing numbers of musicians populating the city. 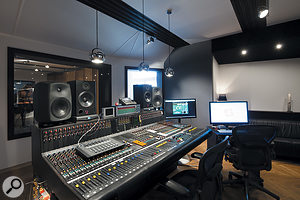 One of the most remarkable new recording venues in Berlin opened its doors in 2013. Interestingly, it is located even closer to the scar that once divided the city than Hansa, the “big hall by the wall”, or Teldex. Although there is almost no physical evidence left of the wall’s existence, Berlin’s unique history is still evident to those who dig deeper, and Jazzanova Recording Studio fits into this narrative.

The studio was founded by Axel Reinemer, a recording and mixing engineer and producer who, together with his partner Stefan Leisering, forms the most prolific production team of the Jazzanova collective. In the past 20 years the group became one of the nuclei of Berlin’s soaring music scene, and they gained a worldwide reputation as forward thinkers through their numerous productions, remixes, DJ sets and live shows. Collaborations with the likes of Wu Tang mastermind RZA and Leon Ware, remixes for Common feat. Kanye West, Calexico, Lenny Kravitz and Incognito were all shaped by Reinemer’s engineering skills. 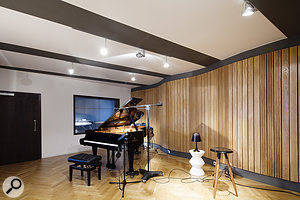 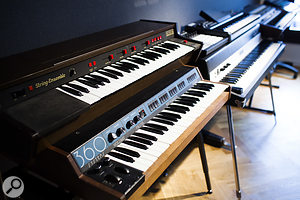 JRS offers a large selection of vintage instruments, including a 360 Systems sample keyboard, a Solina String Ensemble, and Rhodes and Wurlitzer pianos. 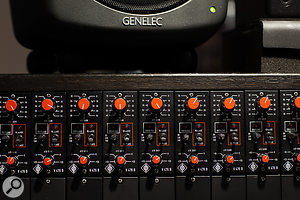 Clockwise from top left: the Neumann console from 1990 is equipped with 32 V476b preamp modules; unusual outboard units include an Orban parametric EQ, a Spectra Sonics 610 Complimiter and a BAE 10x2 mixer; classic compressors on offer include a Chandler TG1, Retro Instruments Sta-Level and Universal Audio 1176LN; and vintage AKG C24 and Neumann U47 and U67 valve mics. 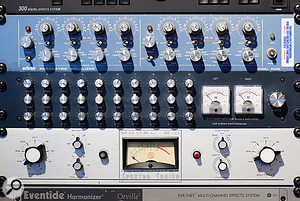 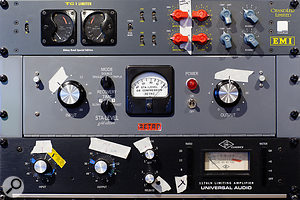 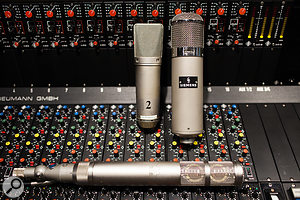 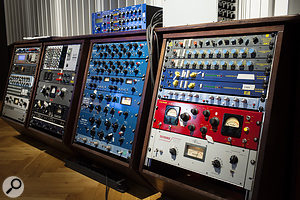 The large outboard collection features a lot of Chandler and Tube-Tech gear.Gentrification, namely the conversion of old factory spaces into luxury apartments, is a much discussed process in Berlin at the moment, and one which eventually forced the collective to move. At that point, Axel Reinemer decided to build a new studio suitable for all production stages, from writing through tracking to mixing. His idea was that the venue should not only serve as Jazzanova’s own production and recording home base, the group having spawned a nine-piece live band in the meantime, but should also be available to outside clients.

Reinemer found an ideal space in an old machine-building factory in the borough of Prenzlauer Berg. Located in the Eastern part of the city, directly next to the former border, the premises had been declared a restricted zone by the East German government, and back in the day there were already recording devices set up in the very rooms that would later be occupied by Jazzanova. They were, however, employed for much grimmer, more sinister purposes: the space was a monitor centre operated by the Ministerium für Staatsicherheit or Ministry for State Security, the East German intelligence agency and secret police.

Luckily, those days are long gone, and today the rooms boast a bright and friendly atmosphere with plenty of daylight. They are laid out in a rather unique fashion. The 35-square-metre control room faces a live area that has not been conceived as one big open space, but as a group of four smaller recording rooms, each designed with its own acoustic properties. Ample windows guarantee a sense of openness, and at almost 40 square metres in size, the largest of the live rooms provides a beautiful natural ambience for the Yamaha S6 grand piano. All rooms are connected with an audiophile system based on Siemens connectors and a LEMO patchbay. There are mic tie-lines in each room, which are, bypassing the patchbay, directly fed to the console preamps.

Said console is worth a second look, too: JRS is built around a discrete Neumann mixer that was commissioned in 1991 by the Berliner Schauspielhaus (Berlin Theatre). Fully modular in design, and equipped with 32 V476b preamps and W492 equalisers, as well as six U473 compressor modules, the desk represents the pinnacle of classic German transistor-based studio technology. Axel Reinemer acquired the console, as he explains, for its “smooth and full-bodied“ sound, and it is flanked with an equally impressive outboard collection. A number of Chandler units such as various LTD1, Germanium and TG Channel preamps are matched by Tube-Tech CL1A, CL2A and PE1C valve units. The racks hold DW Fearn VT2 and AEA RPQ preamps and a pair of Pulse Techniques EQM1S3 EQs, as well as Teletronix LA2A and Retro Instruments Sta-Level compressors, while Reinemer prefers a Bricasti M7 and an EMT 240 gold-foil plate for reverberation duties.

In the mic locker, JRS keep a Neumann U47 alongside a pair of U67s, an AKG C24 and Royer, B&O and Coles ribbon mics, to mention only a few of the more important items, and there is a good selection of instruments, too. Alongside numerous guitar amplifiers, there are electric pianos like Fender Rhodes Stage 73 Mk1 and Wurlitzer 200a as well as a few classic synthesizers and rare keyboard instruments such as the 360 Systems vintage sample keyboard and a Galanti Vibraphonette, as well as a Musser Ampli Celesta. The latter is a particularly rare specimen, one of only a dozen units that have ever been built.

In the studio’s first two years in business, a number of high-profile clients crafted records at JRS. The maiden session took place in May 2013, recording two songs with Melody Gardot. Axel Reinemer has also been working with producer Justin Stanley, and other recent clients include Lorde, Aloe Blacc, Jason Derulo, Kwabs and Italian singer Malika Ayane.