Music for the media isn’t rocket science. It’s far more important than that.

In December 1903, Orville and Wilbur Wright achieved the world’s first controlled, powered aircraft flight. A mere 66 years later, men set foot on the moon. Neil Armstrong was 18 years old when Orville Wright died, meaning that between 1930 and 1948, the first ever pilot and the first ever pilot to land on the moon were alive at the same time.

Along with the theory of evolution, sequencing the human genome and Pot Noodles, the Apollo 11 mission ranks as the pinnacle of human achievement. Yet, 12 months after the spacecraft returned from the moon, the New York Times ran a survey which showed that the space race had fallen so far from public interest that fewer than one in 12 Americans could name either Neil Armstrong or Buzz Aldrin. Aldrin battled alcohol addiction, and eventually this trail–blazing Titan of humanity ended up working at a Cadillac dealership in Los Angeles — where he failed to sell a single car.

Around the same time, in 1976, CBS Records signed a six–year recording contract with the British conductor and film–music maestro Leopold Stokowski. Familiar to millions as the on–screen conductor in Disney’s Fantasia, Stokowski was a contemporary of the likes of Edward Elgar and Vaughan Williams. A keen experimentalist, he championed works by Gustav Maher, Arnold Schoenberg and Dmitri Shostakovich, as well as conducting the American premiere of Stravinsky’s Rite Of Spring. 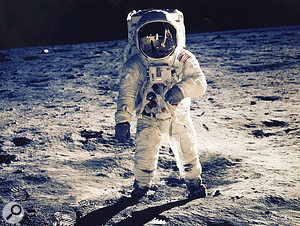 “I don’t know, you go to all the trouble of faking a Moon landing and then no–one even cares!”When we consider of the iconic image of the eccentric, wild–haired showman and leader of the orchestra in dress–suit and tails, it’s Stokowski we are usually imagining. Bugs Bunny posed as Stokowski in the 1949 cartoon Long–Haired Hare, and when asked about being one of the only humans to ever shake hands on screen with Mickey Mouse, the maestro replied “No, no, no. He shook hands with me!”

Famous for bold experimentations in classical concert lighting, orchestral seating arrangements and acoustics, Stokowski was also a huge fan of experimental recording techniques. For some of his orchestral film–score recordings, he had works performed at the Academy of Music in Philadelphia but transmitted using a series of specially installed, high–quality telephone lines to Bell Laboratories in New Jersey, where it was recorded onto photographic film reels as a form of early multitrack. While we might like to think that recording session musicians online is a phenomenon of the Internet age, Stokowski had somehow mastered it before the start of World War Two.

At the time he signed his final contract, Leopold Stokowski was 94 years old, and it would have seen him recording until he was 100. The contrasting fates of Buzz Aldrin and Stokowski perhaps reflect a depressing lack of appreciation for engineering and scientific endeavours in favour of artistic ones. But you could also argue that a career in media music — whilst difficult to start off in, even trickier to stick around in and less likely to secure you a place at the table of humanity’s greatest — does, if you are clever, lucky and tenacious, offer the possibility of career longevity that other professions can only dream of.