There are times when practical considerations outweigh artistic judgements. Especially when there's a war on. 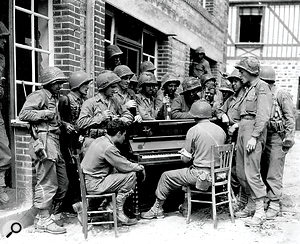 "Well, it is a bit of a pain to cart it about, but it stops bullets better than a keytar.”

One of the most surprising things about this profession is where your gigs can come from. For example, earlier this year I was contacted by, of all people, the Ministry of Defence for the Former Soviet Republic of Georgia. Presumably more used to commissioning nuclear submarines or decommissioning tanks, this year the Ministry of Defence decided instead to commission me to compose an inspiring patriotic march to be performed by the marching band of 43rd Light Infantry Battalion, based in Tbilisi.

Apparently, they were gearing up for another war with Russia and needed to inspire a few thousand more conscripts to throw at unwinnable skirmishes on their northern borders against the might of the giant Russian army. So, naturally, to help them in this noble, heroic and probably futile war, they turned in their hour of need to the one person who could make a difference. The one person who might be able to provide the inspirational tipping point between sweet victory and humiliating defeat, between life and death. They turned to the composer of the theme tune to Jedward's Big Adventure.

Interfacing with clients is always a tricky part of this job. Music is a pretty detailed and subjective thing to commission from someone, and we've all had clients asking us to make our music faster but slower, or could we make the guitars sound more purple? Trying to get a feel for what kind of emotion the Georgians would like me to evoke with my march for the army was tricky, to say the least, particularly when it seemed as if all correspondence between me and them was being translated into a different alphabet, encrypted, sent to some politburo bunker somewhere and mulled over at committee level for months at a time. After some weeks spent putting together a series of ideas for them to listen to, I was hoping for a bit of feedback. If I'm honest, I had a few high-minded aspirations for the lofty honour that came with composing music for a group of musicians as highly trained in bayonet and hand-to-hand combat techniques as in sight-reading.

I was looking for advice from my client on the appropriateness of including traditional Georgian folk-music motifs, I wanted to know about any grand artistic ambitions they had, how they saw the emotional subtext lending meaning to the music. I'll admit I quite liked flirting with the idea of writing an important work that might, one day, unite a struggling nation. I wanted the military top brass to love my brass arrangements so much that, one day, I might even end up with a huge bronze statue of me erected somewhere that pigeons would be proud to shit on.

Eventually, I received the finest, most succinct piece of musical feedback that I, or any of you, will ever get. "Orchestral Bass Drum too heavy to carry into conflict. Composer to replace with clarinet.”

From DX to MODX with Manny Fernandez | Podcast
2 days 18 hours ago.