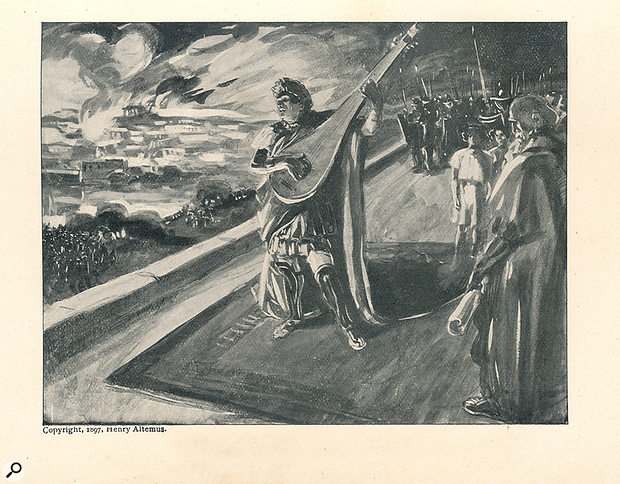 Although Nero’s callousness in the face of disaster didn’t help, it was his invention of the pinch harmonic that finally drove the Senate to open rebellion.

They say that absolute power corrupts absolutely. But it does give you a certain amount of artistic freedom.

If you can overlook the fact that he had his first wife and virtually all of his political opponents murdered in his ruthless desire to cling to power, there is lots to like about Emperor Nero. To begin with, he had a pushy showbiz mum, Agrippina, who began plotting and poisoning her son’s path to power as the next Roman leader while he was still a baby. Her story alone makes the most violent and sadistic elements of Game Of Thrones seem like CBeebies Bedtime Hour. And when she eventually succeeded, and the young Nero attained the position of the Most Powerful Human The World Had Ever Known at the tender age of 17, he fairly quickly had even his own mother murdered. Why?

Because she stood in the way of the one thing that he wanted more than anything else: to be a soundtrack composer.

As an expert player of the lyre, an early version of the guitar, he quickly realised that although wielding absolute power over 50 million people was a pretty cool gig, making music to accompany Roman theatre was really where it was at. At the great games of 59AD the entire elite of Roman high society gathered in horror to see their leader humiliate himself on stage dressed in “platform shoes” and an “embroidered tunic”. Descended as he was from a long line of great warriors and statesmen of the Julian-Claudian dynasty, it was utterly beneath his high office. Strumming his guitar in such a lowly pursuit as showbusiness, typically seen as the exclusive preserve of “cowards, gymnasts and homosexuals”, was to debase the entire empire.

The audience that night, it turns out, reacted favourably, perhaps due to there being among their number 5000 of Nero’s own professional cheerleaders — a division of knights instructed to charge with treason anyone being less than supportive. Nero’s world tour of performing with the theatre continued at the Pythian, Nemean and Delphic Olympic Games, where he forced the organisers to include guitar playing alongside the more traditional track and field athletic events. It will come as no surprise to learn that as well as commanding the occupying army of nearly half a million soldiers, Nero’s artistic qualities were taken seriously by the judges and — wouldn’t you know it — he took the Olympic gold medal each time he took the stage.

However, soundtrack composing can take its toll on even the most humble and emotionally grounded — and Nero wasn’t really playing from a position of advantage in this regard. Paranoid, insecure and possessed of a hugely fragile ego, one day he kicked his pregnant second wife to death in a rage following a particularly bad day at the chariot races. But these showbiz types are nothing if not resourceful, and Nero then found a former male slave who reminded him vaguely of his late wife, began calling him by her name whilst on tour, dressed him in her clothes, had him castrated and eventually married him. And you thought that Led Zeppelin throwing a TV out of a hotel window in the 1970s was the height of rock & roll excess.

After a devastating fire swept through Rome in 64AD it was felt that Nero was a bit too “theatrical and indecisive” to respond effectively, and he was accused of “fiddling while Rome burned”. In fact, while on tour, he didn’t even take the threat of an imminent rebellion in Gaul seriously until its leader Gaius Julius Vindex wrote to Nero and told him he was a crap guitarist. Which obviously meant war.

But by then it was too late. Politics and unimaginable hedonism eventually caught up with Nero and in 68AD, whilst on the run from Senate forces, he committed suicide (like all good tragic rock figures) barely in his 30s. It seems that even if you happen to be the Supreme Leader of the Known World, ordained by the gods themselves, music for media can still be a pretty tough gig.