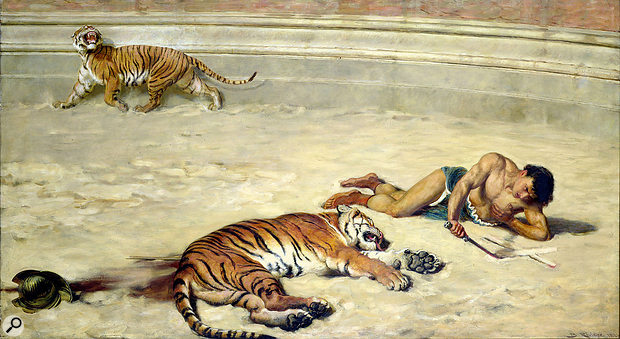 “This wasn’t what I had in mind when I ran away to join the Circus!”

The joy of working in an abstract medium is that everyone will find their own meaning in your music.

Close your eyes and imagine the bit of a movie where someone suddenly finds themselves in a circus big top. Clowns arrive and tumble out of a car, which then falls apart. Custard pies are thrown, buckets of water are everywhere, trapeze artists fly overhead and a ringmaster in a top hat cracks a whip at a roaring lion. What piece of music are you hearing?

You know exactly which piece of music they’re going to use, because you are already humming it in your head: ‘Tim-Tim Tiddle-Widdle, Bop-Bop Bum-Bum’. It’s a piece of music so inextricably welded to the trope of all things clownlike and circus-y that it’s hard to imagine anyone using a different piece, and even harder to imagine the piece being used in any other context. And yet the piece you are thinking of is called ‘Entrance Of The Gladiators’ by the Czech composer Julius Fučík, and was inspired by his interest in the military might of Ancient Rome.

Born in 1872 in Prague, then part of the Austro-Hungarian Empire, Fučík was predominantly a composer of military marches. He studied under Dvořák, and in addition to being a prolific musical talent, was blessed with a moustache so bushy and magnificent he’d make even the most dedicated North London hipster feel like a baby-faced 11-year-old. It’s hard to imagine there was much crash-bang-wallop fun to be had being the band leader of the 86th Infantry Regiment in Sarajevo in the build-up to the First World War, but if your day is in need of a moment of sheer joy, try to match up in your mind the chromatic helter-skelter um-pah hilarity of the piece with images of Carthaginian slaves beating each other to death with hammers for the amusement of the Roman Empire. With each comedy trombone slide, try to imagine men disembowelling strangers for applause — and who among us doesn’t hear trilling flutes and cartoonish, pie-flinging trumpet grace notes without scenes of brutal amputation, heads flying in all directions and the stench of hot, violent sporting death springing to mind?

Three years after Fučík created his cheery soundtrack to the vision of being torn apart by wild animals in an amphitheatre, a publisher named Carl Fisher, spotting a hit, re-published an arrangement of the piece by the Canadian composer Louis-Philippe Laurendeau, rebranded it with the much more appropriate title of ‘Thunder And Blazes’, and the rest is hysterical.

The Ear Of The Beholder

The point is that while we might like to think that we are the best placed to know what our music is about and, if it’s for anything, what it is for, experience shows us that it ain’t necessarily so. I once did the music to a successful programme about a man running around the jungles of the world and pulling reptiles out of trees. My theme tune was originally composed for (and rejected by) the producers of an entertainment show all about e-commerce and the Internet, and I hadn’t changed it one little bit from the first client to the second. These kind of experiences baffle and confuse us but can also work to our favour, particularly where library music is concerned. A quick check of your PRS statement reveals uses of your work in places and contexts you couldn’t even begin to imagine. The applications for our music are wild and numerous, and what each listener takes away from a piece is clearly as personal as the multitude of creative decisions we took to make it in the first place.

As media composers, we don’t have the luxury of free-form creativity, open to irony, expression and interpretation, that most classical and jazz composers do. But in our favour, we usually have much better cars.