When it comes to music technology, truth can be stranger than fiction.

I first met Paul White about 23 years ago, and the first thing we talked about was a hilarious April Fool piece he was writing. It was July. Regular readers will know how big a deal the annual spoof piece usually is in the Sound On Sound calendar of events. And yet I have in front of me the April 2014 edition, which I have read from cover to cover, and I can't find it. 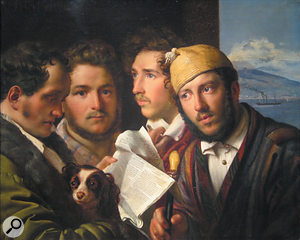 "It says in the April issue that Mr. Beethoven's Fifth Symphony employs trombones. Surely no-one is fool enough to believe that?”It's a good idea to approach with caution anything published in April, and there are a fair few candidates that stretch believability in this issue. There's a 24-track hard disk recorder squeezed into a 1U rack — nonsense! There's a Korg synthesizer that comes in bits and you have to build it yourself — preposterous! There's even a new Roland drum machine dedicated to filling that massive gap we all have in our sound libraries — the elusive, incredibly hard to find TR808 drum samples. Surely it must be this one, right? But to put it on the cover? Ballsy move.

Frankly, I'm stumped, and it's terrifying. We live in a world where the fanciful and the factual are inching closer to each other by the hour, and if you take your eye off the ball for a second, you risk becoming some Edwardian hipster bemoaning the lack of Edison Wax Phonograph dealerships. The current iPad Air is faster and more powerful than the enormous room-swallowing supercomputers of the late 1990s. I'm one of the least 'retro-headed' people you could ever possibly hope to meet, and yet large amounts of the hardware in my studio — and indeed a good number of my sound libraries — pre-date even that.

If I could open up a wormhole in the space-time continuum and offer advice to my 20-year-old self, he'd probably think I was loopy. The idea of setting up a company that shows users a 'book of faces' you access over the telephone and use to share pictures of your breakfast with friends around the world, or that in the future you would have to take your shoes off before they allowed you onto a plane, would be met with the kind of patronising disbelief usually reserved for drunken guitarists who tell you about the time they once jammed in a pub in Kidderminster with Robert Plant. But of all my futuristic mumbo-jumbo, the one thing the 20-year-old me would find hardest to swallow would be that I have a free piece of software called GarageBand on the phone in my pocket that turns it into a fully functioning multitrack recording studio, complete with thousands of virtual instruments.

Yeah, I'm pretty sure I'd think I was mad.

Predicting where we'll go next is impossible, and yet impossibly exciting. How much of it we choose to engage in is largely up to us. Because, if we strip away the format of our music, ignore the medium we chose to capture it on and set aside how we deliver and make money from it all, the technology is ultimately an irrelevance. The longer I'm in this industry, the more I'm comforted and impressed by the realisation that ideas are still the only real commodity that matters. The power of the song, the timeless value of a great piece of composition or the perennial strength of a good story well executed are all that anyone really cares about. And if you can't see that — more fool you.