The people who are paying us don't always notice when we drop the ball — but it's a matter of pride. 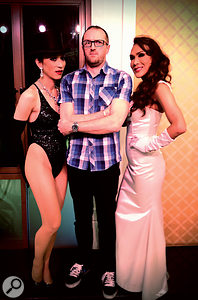 I was at a ladyboy cabaret show in central Bangkok last week when I had a moment of personal revelation. It was during the second act, when the Cher impersonator was lip-sync'ing to 'If I Could Turn Back Time' with four feet of feathers on her head, tasselled bra, killer high heels, and eight backing dancers, all wearing immaculately bejewelled slinky cocktail dresses.

Her miming of the words was impeccable, and made all the more impressive by the fact that she'd probably learnt the lyrics phonetically and it was likely didn't even speak the language in which she was pouring out her heart. She made it as far as the middle eight when one of her bollocks slipped out of her leotard. Delicately, she attempted to redress the malfunction with the one free hand not twirling her enormous pink fan, and before the backing dancers were in position lifting her over their heads for the firework finale, everything was tucked back in and Joe Public never clocked a thing.

Well, I noticed. And it reminded me a lot of my job.

I once had the unenviable task of having to secretly slip an entire string orchestra under the noses of one of the biggest and most powerful music companies on Earth.

I'd been commissioned to score a series that needed good amounts of tension, drama and scale. Everyone was really happy with all the music I'd composed, but I knew it could be even better if we could replace my sampled string parts with live players. I begged the programme-makers to give me the money to do it. I hassled the publisher and the music department and they all responded as if I was insane, asking to make expensive amendments to music already signed off and approved. In the end, I paid for the 16 players and studio time myself, recorded it all, added the live parts to the tracks, and re-submitted them to the production. I then found myself in the unusual position of simultaneously hoping everyone would be delighted with the new versions and yet at the same time hoping no-one would notice the changes.

Virtually everyone has a story of constructive music bullshit, and most decent studio engineers, if you ask them nicely, are usually happy to provide a set of dummy faders at the end of the desk that the A&R man, Production Exec or drummer can play with at the mix stage, harmlessly adding their own brand of magic to proceedings while the adults get on with the actual business of work. Stick around in this game long enough, and you too will experience the terrible conflict of interests that arises from clients complimenting you on changes you've made to music that you haven't yet adjusted.

I want my clients to be happy. I want to do the best possible job for them. I'm just never sure what to say if they believe I've done a better job than I think I have. Perhaps, ultimately, it insulates us from the flip-side scenario when we receive criticism of or indifference to work we've given our all to, that might have fallen on deaf, or indeed cloth, ears.

When it comes to creative arts, maybe the best policy is to simply smile and wave, because whether it's using more samples than we'd like to, an addiction to quantise or Auto-Tune, or poking wayward genitalia back into our Spandex costumes, deception, it would appear, runs deep.