When clients have an instinctive reaction to the music they've commissioned, the original brief often goes out of the window. 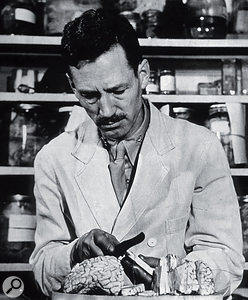 "Remarkable. This is the sixth TV executive I've dissected, and again the empathy gland is missing... Also, I could murder a kebab.”

We still live in dog-eat-dog times. We might like to think of ourselves as elevated and erudite, but for the vast majority of our hominid evolution, we lived pretty brutal and animalistic lives. For early humans, hunting in packs and tearing our still-warm food apart with bare hands was a cause for happiness, not to mention relief that existence on the edge of starvation might be pushed back for a few days. And instinct can be a surprising thing.

I have a good friend who is a pathologist. When presented with a dead body, her job is to remove all the internal organs 'bowels to brain' and try to accurately establish the cause of death. Basically, she spends every working day elbow-deep in someone's chest cavity, and one of the most common complaints in the autopsy business is that gutting a human always makes you feel really, really hungry. Gut instincts can be really confusing.

Our opinions of our own work are equally fraught with contradiction. The process of musical creativity is a long line of choices and crossroads, which culminate in a finished piece. Each decision along the way has a massive impact on the outcome, and every one of the thousands of decisions we make when composing or producing informs the next stage. Unfortunately, the people appraising our work have the unenviable task of trying to appreciate and understand this process when offering feedback.

I recently submitted a couple of demo tracks for a TV project that were made of little more than filthy drum loops and some '70s funky guitars. They were, as the brief requested, energetic and beefy, but minimal. The feedback came from the production team: they really loved the tracks and wanted to include them on the show, but I needed to change the drums because they weren't clean enough. Oh, and the guitars sounded a bit retro, so could I make them more modern?

I was reminded of a story told to me by a friend who worked as a flunkey on a TV show where a former, diet-obsessed, hysterical female pop star once asked her to bring some cheese on toast — but requested that it be made with 'no wheat and no dairy'.

Trying to explain what we do and how we do it to our clients is vitally important, so that they can build up a picture of what can be changed easily, and what is really difficult. The demo pitching process is a perfect example of this. Obviously, you want to submit the best-quality work, and if you are clever, you might want to submit more than a couple of ideas to give them some choice. But unless you are insanely lucky, you won't be paid to develop or submit these demos, which is where including riffs and licks from sample libraries can help. The problems then occur if you are successful in the hunt and actually get the gig, whereupon you have to either replace the sampled sounds that they've come to love (you can immediately stuff that idea back into the cereal box it came in), or explain to a client that there is an outside chance that the little brass lick that gives their important TV show such a unique and distinct identity might also theoretically appear prominently in a future telly commercial for male incontinence products. Which could quite easily be scheduled to appear in the advert breaks of their show, and there's nothing that anybody can do about it.