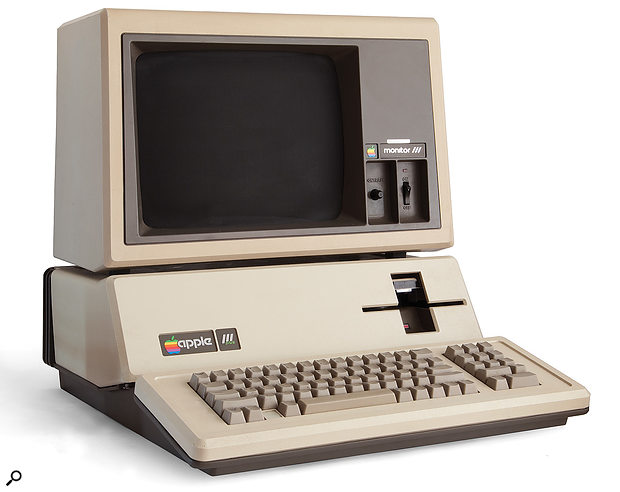 The failure of the Apple III meant that neither the manufacturer nor their founder Steve Jobs ever enjoyed further commercial success at all. Didn’t it?Photo: Bilby

All TV people lose faith in their abilities sometimes, but at least no–one blames the composer when things go wrong.

Are you any good? Seriously: how can you tell? Have you had some of your music played on TV? Radio? Released a record? Done something with a good number of hits on YouTube? Made a few quid? Does that count? Does success always equal quality? How many potentially amazing soundtrack composers do you think are living lives of lost potential or untapped misery in the poorest parts of the world? Does the opinion of others matter? Your peers? Your friends?

Self–doubt is the primary driver that pushes us forward, but it can also be our biggest obstacle. I’ve seen classical musicians of the highest possible calibre beat themselves up after completing a performance that is the culmination of literally decades of perfecting a skill, because they feel they could have done better. We tell ourselves that good enough simply isn’t good enough, and the greatest fear we carry is that somewhere our peers are laughing up their sleeves at us, simultaneously loathing us for both our hubris and ineptitude.

It Could Be Worse

What is sometimes easy to forget is that those actually judging our work — our clients — are just as prone to crises of confidence in their own abilities as we are. The difference is that their involvement in a project often represents many, many months of hard work and commitment, and their names are displayed in a much more prominent place in the credits. As composers, if a project bombs, we comfort ourselves with the ‘knowledge’ that it’s because we weren’t given the right brief, or that the people commissioning us were inept. If it’s a success, it’s directly as a result of our genius making it so.

One of the privileges of managing to stick around in the TV industry for any length of time is seeing that the people who started out at the same time as you as junior assistant TV producers often end up as executive producers or bosses of entire channels. In other words, your mates that you did favours for 20 years ago are the same people whose entire careers will now be measured against the success of a show that was three years in development, with title music you spent two days working on.

You Have To Start Somewhere

Being professionally creative can be terrifying — and not just for the little guy, either. You should see how the big boys mess it up from time to time.

The Apple III computer was universally seen as a disaster. Released in 1980, it was a camel of a product designed by marketing committees rather than engineering talent. It was over–priced, under–spec’d and, at Steve Jobs’ insistence, had no fans or air vents in its casing. As a result the base had to be made out of heavy cast aluminium to act as a heat sink, and even then it often failed to dissipate enough heat away from the chips, which in turn would become dislodged from the circuit board. In these circumstances, Apple advised customers to lift the computer a few inches above the desk and drop it, to help re–seat the integrated circuits back onto the motherboard. It’s hard to imagine that the world’s most powerful and creatively respected corporation once seriously suggested gravitationally assisted percussive maintenance to try to make one of their products work properly, but they really did. And we should all take comfort from that.

Ultimately, you are the best and indeed only arbiter of your abilities. No–one else can even come close to understanding how many decisions you had to make to get you to the end of a creative process. And at every step of the way, you are trying to be the very best version of you that you can be. Go easy on yourself. You’re probably better than you think, and even the American national anthem ends in a question mark. Or, as Jake the Dog famously observed in an episode of Cartoon Network’s Adventure Time: “Dude, sucking at something is the first step towards being sort of good at something.”