Recording studios are increasingly finding their way onto our TV and cinema screens. And it’s about time...

Recording studios are time machines. They are also places where you can spend months working on a three-minute single, and that kind of horological elasticity was exactly what the HBO series Vinyl, which started in February and which chronicles a very distinct time and place in the music business (specifically, New York in 1973), was looking for. It found it in two iconic recording studios, Avatar and Electric Lady, and while the show tends to overplay some of the madness of the era, it’s the studios that quietly, measurably contribute to the series’ visual and aural authenticity.

Of the two, only Electric Lady, founded in 1970 by Jimi Hendrix, was in business at the time; Avatar’s predecessor, Power Station Studios, came along in 1977, but it retains copious amounts of designer Tony Bongiovi’s signature wooden trim that stamps it solidly of the ‘70s. When Vinyl’s crew showed up for a day of shooting there last year, they came prepared to move the facility even further back in time.

“When you walk into the studio, [Avatar] already looks like it could be the 1970s, or the ‘80s or ‘90s — the wood gives it a timeless studio look,” says Tino Passante, the studio’s manager. But Vinyl needed more: the computers in the control room were banished and even the studio’s own Studer A800 24-track deck was a bit too recent, so a 3M M79 recorder with more vintage credentials was wheeled in from elsewhere. The rear-wall outboard rack was removed — digital readouts would be dead giveaways — and replaced with a cabinet holding turntables. Only the Neve 8088, which dates to the late ’70s, eluded the time warp, due to its sheer mass. Then came the finer details: sand-bottomed ashtrays, clunky rotary-dial telephones, and gold and platinum records, none newer than 1973, on the walls. Even the lounge’s couch was backdated, its cushions replaced with garish lime-green ones that better reflect the retina-searing Kool Aid colours of the period’s interior décor.

“The attention to detail was painstaking, incredibly so,” Passante says, and some of that studio detail is attributable to Ken McKim, a long-time itinerant studio tech in the New York area. McKim has an eye for this sort of thing: he points out that Chadwick Boseman, who plays the lead in the 2014 James Brown biopic Get On Up, was singing into the wrong side of a Neumann U87 in one of that film’s studio scenes. As it turns out, the studio in the next unit over from McKim’s Trouble Report shop in New Jersey is owned by Stewart Lerman, Vinyl’s music producer, who brought McKim in as a consultant. He sourced the 3M recorder, as well as a Dolby M-series noise-reduction system and what he calls “tons of minutiae” for studio scenes. 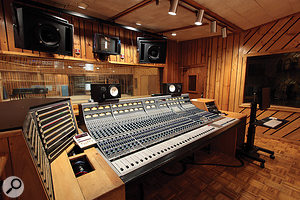 “They were obsessive about it,” he told me. “I was shocked at the lengths they’d go to to make it perfect.” The director of one episode wanted Avatar’s console talkback microphone in a shot, apparently to make it clear how an actor was communicating with someone on the other side of the glass. He suggested a complicated scissor-boom mic stand that would be placed on the console. McKim was aghast. “It was something you’d see in a radio station but never in a recording studio,” he says. Instead, he removed the panel covering the Neve’s integrated talkback mic and extended it enough for the camera to be able to catch it. In another scene, in a studio set built at the Brooklyn sound stage, a prop console came with a muted radio hidden inside to make the meters move. But since the meters would be clearly visible on screen as a vocalist sang in the shot, they had to be obviously synchronous with the music. “So I rewired the path from the [location] playback engineer so that the signal passed through a tape machine and into the console, where I disconnected the radio and soldered in connections from the tape machine to the VU meters,” McKim explains.

McKim also gave the cast lessons on studio etiquette, explaining the unspoken hierarchy that those who do it professionally know intimately. He was at all of the studio location shoots, often looking through the viewfinder, making sure the amps were miked correctly, even though they might never make a sound.

Vinyl is one of a number of music business-themed shows on television now. Others include Empire, an updated iteration of the Berry Gordy/Motown epic with a hip-hop overlay, and Nashville, a soap opera with steel guitars. None have gotten particularly stellar reviews — they unashamedly play to stereotypes and riff off of hackneyed tropes like the closeted gay country singer (there’ve been a few) or the brutal urban-label overlord (Suge Knight, P Diddy, take your pick), seemingly satisfying viewers’ expectations of their respective genres. However, these other shows also spend time in actual recording studios. Nashville shot and recorded in Blackbird, Starstruck and Ocean Way Studios, among others, and Empire reportedly filmed some scenes at Electrical Audio, the Chicago studio owned by engineer Steve Albini.

We’re also seeing recording studios more often on cinema screens, in large part due to the proliferation of music documentaries. FAME Studios is the backdrop for much of Muscle Shoals‘ footage; of course, Sound City is the star of Dave Grohl’s eponymous documentary; backing-singer homage movie Twenty Feet From Stardom finds its way back to Sunset Sound; large parts Love & Mercy, the Brian Wilson biopic, take place in EastWest’s Studio 3 (formerly known as United Western Recorders, where the Beach Boys’ recordings were made). And Standing In The Shadows Of Motown... need we say more?

It’s good to see recording studios getting their due, giving everyone a peek into the process. It might not be the heyday of the destination production facility anymore, with major-label purchase orders as rare as record stores have become. But in a lot of other ways, if Cecil B De Mille ever asks, we can say that the studios are ready for their close-up.