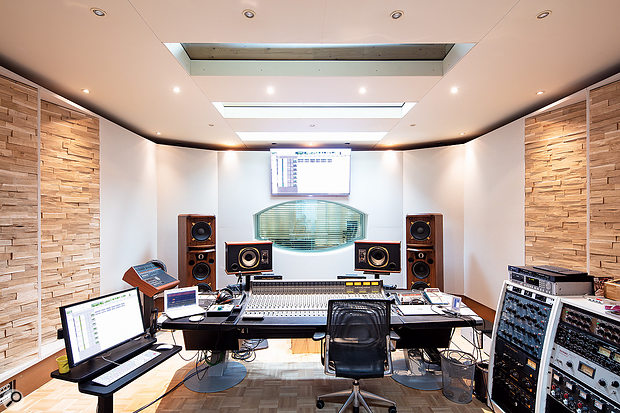 Having the right gear is obviously crucial to the success of any recording studio, but other factors are sometimes overlooked: notably, how the gear is connected, and how it is supplied with mains power. The stuff that happens under and in between the racks often matters just as much as, if not more than, the gear presented in the racks themselves. Riverside Studios in Cologne certainly have done their homework in this department — and in all others, too! The studio has existed for several decades, but a recent move provided the opportunity to combine the experience gathered over the years into a new venue that oozes high-end from every pore. Not only is the equipment in the racks top-notch, but so too are the wiring, the rooms, the instruments and everything else you can think of. 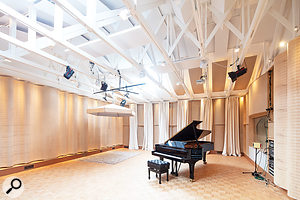 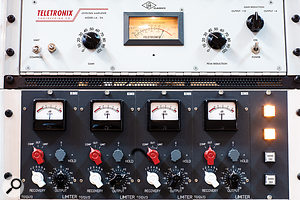 The outboard setup includes four rare original EMI TG12413 limiters.Studio mastermind Ralf Kemper has produced over 1000 commercial soundtracks in his career, collaborated with the likes of Alan Broadbent, Quincy Jones, Joe Pesci, Adam Levine and Peter Erskine, and won numerous accolades, pe13rhaps most notably the 2010 Latin Grammy for Arturo Sandoval's 'A Time For Love'. He built his first studio, Kemper Music Production, in Düsseldorf in 1990. In 2013 he moved his workspace to the city of Neuss on the opposite side of the river Rhine, and due to its close proximity to the water, it was renamed Riverside Studios. Then, in 2017, Kemper took over the former Sound Studio N in Cologne and made it the new Riverside headquarters. 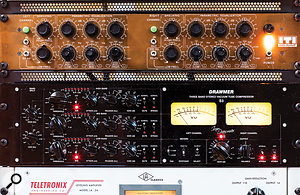 A rare ITI EQ and Drawmer S3 multiband compressor in Studio 1.Even though the space was home to a studio before Kemper moved in, the facility underwent extensive remodelling in collaboration with renowned German engineer and acoustic planner Fritz Fey, becoming the first recording studio in the world to employ a flexible wooden acoustic system previously used only for the concert hall at the Zurich University of the Arts. Construction began in January 2017 and took almost two years in total.

The heart of Riverside Studios is the large 85-square-metre recording hall. With a ceiling height of over 5 metres, it can accommodate up to 35 players and offers excellent acoustic properties, including a height-adjustable 'drumbrella' acoustic screen as well as a magnificient Steinway D-274 grand piano. 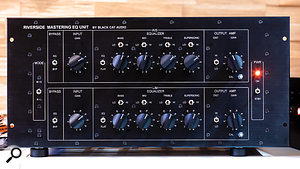 The Riverside Mastering EQ unit is a custom design developed in collaboration with Black Cat Audio. 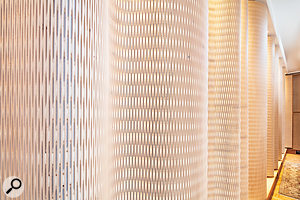 The flexible wooden acoustic treatment is one of the unique features of Riverside Studios.All rooms at Riverside can be freely interconnected, but the flagship control room looking into the hall is the 47-square-metre Studio 1. Centred around an SSL AWS 900 console, it offers a high-end monitor setup comprising Westlake HR7 and Tannoy ML10 speakers and EAR Monoblock amplifiers. With a strong focus on Pultec and Fairchild-type processors, the outboard rack holds two pairs each of Pulse Techniques' EQM-1S3 and MEQM-5, as well as EAR 822Q and 823 MQ units, an EAR 660 Limiting Amplifier and a Black Cat Audio Jaguar 670 Fairchild clone. There are also rare vintage pieces like an ITI EQ and four EMI TG12413 limiter modules, as well as an AMS RMX-16 reverb, and modern devices like a pair of RND Shelford Channels, a TrueMatch RMC Reference Microphone Converter and the unique Riverside Mastering EQ Unit, which was developed in collaboration with Berlin-based Black Cat Audio. The uncompromising attitude shines through here with every cabling detail, the impressive monitoring setup and kit like the PS Audio Power Plant mains regulators. 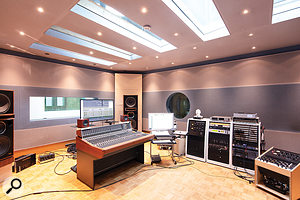 The Studio 2 control room is based around a Studer 902 console.The control room of Studio 2 offers the same floor space, but a slightly different technical layout. At its heart there is a Studer 902 console with 24 channels. The JBL 4355 main monitors are again powered by EAR Monoblocks, and the outboard selection includes a Fairchild 670, another Black Cat Audio Jaguar 670, an EAR 825Q EQ and a Rockruepel Limit.One analogue limiter. The live room of Studio 2 is smaller than the large hall, but designed along the same principles. It is suitable for recording small groups, overdubs, sung and spoken vocals and so on.

Live In The Studio 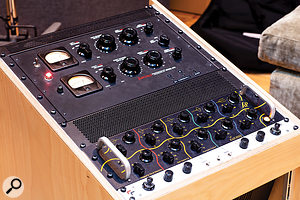 Fairchild 670, EAR 825Q EQ and Rockruepel Limit.One processors in Studio 2.Today the team around Ralf Kemper provide recording, mixing, mastering and sound design as well as transfer and restoration of analogue tapes. In addition, the studio regularly hosts live concerts in the large hall, a very intimate setup also used for recording sessions with a live audience. The first recording sessions in this venue in the Riverside era took place in 2017, with an Alan Broadbent Trio concert and solo recording and another recording session with the Fred Hersh Trio. 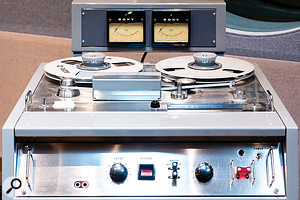 Riverside is host to a beautiful Sony ES-22 tape machine.Further projects since then have included classical music productions with composer and six-time Grammy winner Jorge Calandrelli, mastering sessions for a big‑band album by Joe Pesci, and recording sessions with international artists like Bob Reynolds (Snarky Puppy/John Mayer), Lionel Louke (Herbie Hancock), Kenny Werner and Gregoire Maret. Riverside has also hosted studio concerts with musicians from the Cologne jazz scene like Bob Mintzer, Hans Dekker and John Goldsby, as well as solo piano nights with renowned pianists Benyamin Nuss and Severin von Eckardstein, and the hall has also been used for events outside the music industry. Soon Riverside will be adding another room suitable for 5.1 recording and mixing, and through its own Eden River Records label, the studio also offers an outlet for audiophile recordings.