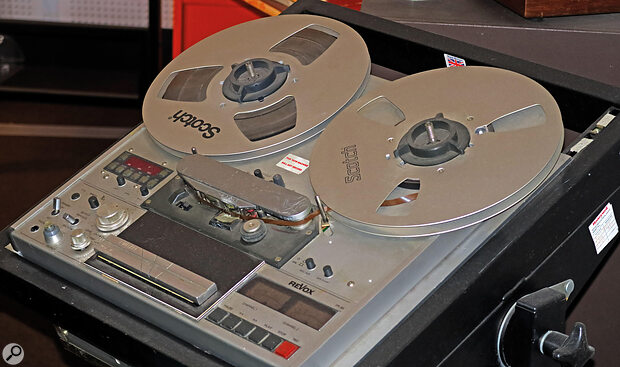 The final Revox tape recorders left the factory almost 25 years ago, yet the enthusiasm and support for these classic machines remains as strong as ever.

There will be few ‘baby boomer’ studio engineers who won’t go a little misty‑eyed at mention of the legendary Revox A77: one of the first all‑transistor, high‑quality, open‑reel tape recorders that non‑professionals could afford. And, of course, those of slightly younger years will undoubtedly have much the same emotion for its successor, the elegant B77. However, it is this latter descendant’s close cousin, the PR99, that I really want to reminisce about here! Forty years ago the PR99 was launched to span the gap between the Swiss manufacturer’s Revox consumer machines and their more expensive professional Studer recorders.

Although the A77 (and later B77) was designed fundamentally for the 1970s (and ’80s) domestic hi‑fi market, it has been suggested that most of them were bought for professional or semi‑professional applications. They certainly became familiar sights in musicians’ home studios, educational facilities, and in radio production offices, as well as making regular appearances in professional recording studios and location recording trucks, too!

The simple reason for this enormous breadth of service was that, despite their notional consumer origins and relatively affordable prices, these were extremely well‑engineered, rugged and reliable machines which, when correctly aligned and maintained, achieved remarkably good technical specifications and gave surprisingly little away to pukka professional machines. These Revox recorders could also accommodate ‘professional’ 10.5‑inch tape reels and run at 15 inches per second, when most comparable domestic machines could only manage 7‑inch spools and 7.5ips!

Revox’s A77 was constructed around a strong aluminium die‑cast chassis, just like its Studer cousins, to ensure a stable and accurate platform supporting the transport motors, tape platters, guides and heads. And instead of sharing a single motor and relying on belts, pulleys and cogs to drive the reels, the A77 featured three powerful direct‑drive asynchronous AC motors, with the capstan motor being electronically controlled via a tacho‑sensor for absolutely speed accuracy — most consumer machines of the era relied on a synchronous motor whose speed depended on the (varying) mains frequency. In the A77 everything was controlled electronically, using relays and solenoids, allowing ‘light‑touch’ transport buttons and versatile remote‑control options, while the audio electronics were arranged on modular plug‑in circuit cards for easy access and servicing.

Studer Revox also designed and built — to exemplary standards — their own ‘Revodur’ tape heads, which allowed their recorders to deliver a significantly flatter frequency response than most of their contemporaries could manage. Moreover, head life was maximised through gentle tape paths with modest wraps, resulting in less tendency to develop flats and grooves in the heads. One amusing Revox A77 advert from the ’70s stated that the company guaranteed four parts for just a year: the capstan, the pinch‑roller, and the record and playback heads... while the remaining 842 parts were guaranteed for life!

In its 10 years of production from 1967 to 1977, the A77 model evolved through four Marks, and around 450,000 machines were built! In 1977 it was succeeded by the B77, which built upon the great successes of its forebear while maintaining the same fundamental design concepts, mechanical engineering and build quality. The audio circuitry was largely derived from the earlier model, but the B77’s transport control system was completely redesigned principally to use digital logic instead of relays. The B77 achieved slightly better technical performance across the board, and most say it sounded it a little better. It was certainly more generously equipped with features, including sound‑on‑sound via an internal track dubbing facility.

Around 220,000 B77s were built altogether, from a catalogue of 61 different model variants, and at the height of production, Studer’s factory in Regensdorf, Switzerland could churn out around 175 new machines every day! Different model options started with selecting the head format. The ‘professional’ options included mono full‑track, two‑track (with a wide 2.0mm NAB‑standard guard band), or stereo (with a narrow 0.75mm DIN‑standard guard band), using Studer’s acclaimed ‘butterfly’ heads to minimise magnetic crosstalk. These three formats ran the tape in a single direction, of course, while the standard ‘consumer’ option employed the stereo quarter‑track head format to record a stereo track in one direction, whereupon the tape could be turned over and a second interleaved stereo track could be recorded...