Q. Are wow and flutter key to that analogue tape sound? 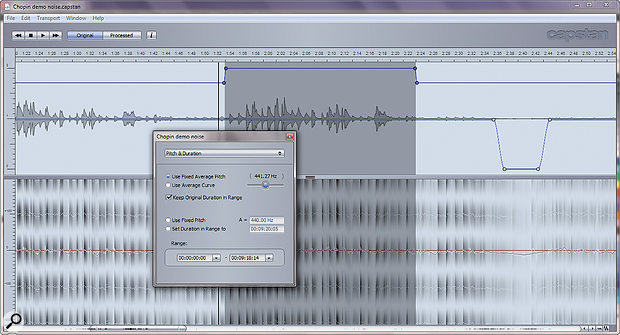 Though wow and flutter may once have been a phenomena that we were used to and could therefore ignore, their absence in modern recording means that this is no longer the case. Celemony's Capstan is an incredibly effective tool for removing these unwanted effects, and it leaves few artifacts.

I have come to the conclusion that wow and flutter are a lot more important in the sound of tape and analogue recordings than they are usually given credit for. Most of the discussion about tape seems to concentrate on tape compression and the effects of transformers in the signal path, for example, and the majority of plug-in treatments designed to make recordings warmer focus on this. I don't hear of many people applying wow and flutter plug-ins, or waffling on about the right type of capstan emulator.

Recently I was re-reading one of those pieces Roger Nichols wrote for SOS a few years back, where he mentions that someone had invented a de-wow-and-flutter system that tracked variations in the pitch of the bias signal to correct for wow and flutter, and he said the result sounded 'just like digital'. I recently did a couple of projects where I more or less did the same thing, albeit hugely more labour-intensively: I transferred some old four-track cassette recordings to my PC. The recordings used a drum machine, which I still own, so I also made a clean new digital recording of the drum machine part. But, of course, due to wow and flutter, the old four-track recordings were out of sync with the drum machine on a couple of bars, so I ended up chopping up the four-track capture bar-by-bar, and time-stretching each bar so that the waveform of the drum machine recording on tape lined up exactly with the new, clean digital version. By the time I'd finished, the four-track did indeed sound quite different in character to what it had before. I think Nichols was right. I wonder what opinions the SOS team might have about the importance of wow and flutter on getting 'that sound'?

SOS Technical Editor Hugh Robjohns replies: I agree that the subtle (and sometimes not so subtle) speed instability of tape is an important subconscious factor in the tape sound. Any time-modulation process, including wow and flutter, creates additional frequency components, and I think the subliminal presence of these on all analogue recordings is sometimes missed from digital recordings. However, I suspect it is actually the presence of the far more complex harmonics produced by 'scrape flutter' that is the most significant element, rather than the very low and cyclical frequency modulations caused by wow and flutter. Added to which, I find wow and flutter generally quite objectionable, especially in music with sustained tones, like piano and organ recordings.

However, what you are describing here is not actually wow and flutter. You're describing speed 'drift', which is an absolute difference between the record and replay speeds. It's not unusual for two devices to run at slightly different speeds, even in digital circles. Two separate CD players might run with sample rates of at 44101Hz and 44099Hz, for example, or two analogue tape machines at 19.1cm/s and 18.9cm/s. If you start the two machines at the same time with identical recordings, they will drift in time relative to one another, just as you found with your four-track cassette — although in that case I suspect the problem was caused either by poor speed control or physical tape stretch.

Wow is a low-frequency cyclical speed variation, which is very common on vinyl records if the centre hole is punched slightly off-centre, of if the disc is badly warped. Flutter is a much faster-frequency version of the same thing, typically caused by a worn tape-machine capstan or a lumpy pinch-roller. Scrape flutter is a higher-frequency effect again, typically caused by the inherent 'stiction' or vibration of tape against the heads as it is dragged past.

Wow and flutter, being cyclical phenomena, don't usually result in a change in the average replay (or record) speed because any short-term speeding up is balanced completely by the same amount of slowing down as the cycle completes.

I'm not at all surprised that your heavily edited and time-stretched 'fixed' version of the electronic drum track sounds different from the straight digital recording, specifically because you performed so much processing on the individual sections. However, that 'fixed' version will also sound very different from the drum machine's direct analogue outputs. You're not 'fixing wow and flutter' but actually correcting for speed drift or tape stretch by time-adjusting the original material in short sections, which is naturally messing with the sonic character of the drum beats in short, unrelated sections.

Returning to conventional wow and flutter, though, after nearly 30 years of 'digital stability' most of us have been completely weaned off the sound of wow and flutter, and our ears have become very good once again at spotting these grossly unnatural phenomena that we were once so happy to ignore. Last year I reviewed Celemony's Capstan software, which is designed to fix both wow and flutter and speed-drift issues, and it does so extremely well and without artifacts!