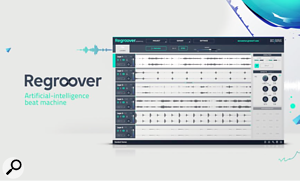 Billed as the world’s first artificial intelligence beat machine, Regroover from Accusonus is a new plug-in that promises to analyse fully mixed audio clips and extract the individual elements within. Feed it a drum break, for example, and Regroover will split it into individual layers – kick, snare, hi-hat and so on – that can then be rebalanced, remixed and processed individually.

Regroover is based on the same patent-pending audio analysis technology that powers Accusonus’ Drumatom drum leakage suppression software. While the software promises to analyse and split sound files automatically, a range of parameters and an annotation tool are available to manually adjust the way the algorithm operates. Whether you want to refine the separation of the various sonic elements within the groove or actively abuse the technology for creative effect, the means are provided, and Accusonus say that Regroover is capable of pulling out new sounds and rhythmic patterns hidden within the audio file. The plug-in will also warp audio to sync to the host DAW tempo, with multiple outputs to feed back into the mix.

For producers and DJs who use sampling and beat slicing to remix and compose, this looks like the next logical step, allowing you to manipulate not just chunks of the whole audio file but elements within it too. Two versions are available. Regroover Essential will do all of the above and can load expansion kits containing ready-made grooves. Regroover Pro also lets you create and edit expansion kits of your own and adds a full drum sampler complete with mixer and effects. Regroover Essential is out now, priced $99. Regroover Pro will be released in November, priced $199.