Published 24/11/08
Fairchild 670 reborn for the 21st century
Simon Saywood might just be a living legend. He has, seemingly single-handedly, produced a faithful recreation of what’s regarded by many as the king of compressors: the Fairchild 670.

The journey from drawing board to studio rack has taken over five years, and along the way, he’s managed to get component manufacturers to put into production a direct replacement for the GE Five Star 6386 tube, eight of which (matched, of course) were used in the original device. He's also sourced custom-made transformers from Sowter, and has redesigned the power supply to be more efficient than that of the original ’50s device. The result: the Analogue Tube AT101. 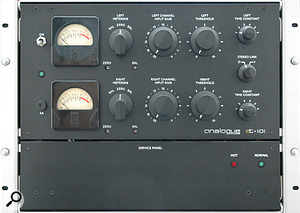 There’s really only one major change in operation, with the removal of the Lat/Vert mode, which switched the original device into mid/side mode. Instead, and potentially more useful for the studio user (mid/side compression is normally associated with mastering, not tracking), the AT101 has a stereo link control, meaning both channels can be controlled by the knobs of channel one.

Cosmetically, the AT101 varies slightly from the Fairchild, with more modern-looking knobs and switches, but the layout of the front panel is identical, complete with the screwdriver-adjustable ‘zero’ and ‘bal’ calibration controls. The Service Panel, the bottom-most strip of the device, has simple temperature-status LEDs, which indicate whether the 101 is running ‘normal’ or ‘hot’. This is not a cut-off or a warning, says Saywood, merely a signal that it might be a good idea to provide more ventilation for the device.

An improvement that will surely be welcomed by all is that of XLR connectors for the audio inputs and outputs. The 670 had screw-down terminals, which require more time and sufficient space to connect up. An IEC socket allows for a conventional power lead to be used.

And now for the price: including VAT, the AT101 costs £13,512, which is a lot of money whoever you are. But it’s clearly worth it; many studios have already ordered, but perhaps this is because the originals often fetch a few thousand pounds more! Simon says the first production run should be finished by mid-January, with more to follow “shortly after”. Well done to him!