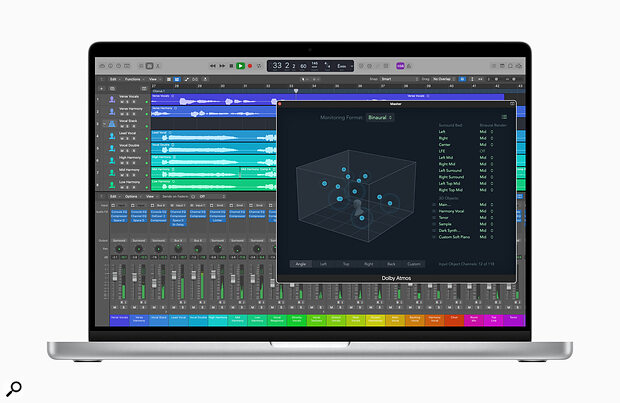 The latest version of Apple's flagship DAW, Logic Pro X, has just been released. Version 10.7, which requires macOS Big Sur to run, includes a number of additional features, new sounds, and the usual bug fixes, but the headline feature is that the mixer can now accommodate audio in Dolby's fast-growing Atmos immersive multichannel format.

Spatial audio tools now include Atmos panning, and the ability to export to Dolby Atmos ADM BWF format. Thirteen of Logic's included plug-ins have also been expanded to accommodate up to 7.1.2-channel Atmos sources. Among those plug-ins is the ever-popular Space Designer, which now includes B-format Ambisonic impulse responses. What's more, it's not necessary for users to have a full-fat Atmos monitoring setup to get started — monitoring can be performed binaurally (ie. rendered down to stereo for headphone users), and goes all the way up to 7.1.4-speaker arrays.

In terms of new content, Logic Pro X 10.7 adds over 2800 Apple Loops, covering a wide variety of genres and apparently made with the help of some of the world's top producers; over 230 new patches for the included collection of software instruments; and 50 new vintage and modern drum kits, including both acoustic and electronic percussion sounds.

The Step Sequencer has also been given particular attention, and now includes a Live Record mode, which allows for real-time playing to be captured as step data; new Mono and Legato modes; customisable row labels; the ability to create multiple rows for the same note or automation data; and the ability to convert MIDI Regions into Pattern Regions.

Finally, Logic Pro X 10.7 has apparently been optimised to work on Apple's new Silicon hardware, including the also newly announced MacBook Pro models (more below). To find out more about the latest release, click here.

Available with either M1 Pro or M1 Max second-generation Apple Silicon CPUs, the new MacBook Pros come in two sizes: a 14.2-inch model and a 16.2-inch screen version. The newcomers herald a welcome return to multiple physical expansion ports, including an HDMI connector, an SDXC slot, a headphone jack, and no fewer than three Thunderbolt 4/USB-C sockets. The controversial Touch Bar, which Apple introduced a few years ago, has been ditched, with the keyboards now once again sporting the traditional Function key row.

As on other recent Apple computers, the new MacBook Pros are all Atmos-ready, with the larger 16.2-inch model boasting no fewer than six integral speakers. More info: Full specifications