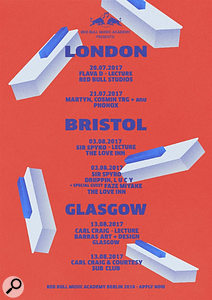 Red Bull Music Academy (RBMA) will return to its birthplace in Berlin for 2018, the 20th anniversary of the global festival and workshop series. Celebrating the opening of the application phase, RBMA announces a series of lectures and events this summer across London, Bristol and Glasgow for those wishing to apply to next year’s landmark Academy. A unique opportunity to hear from past alumni as well as some of the scenes finest artists, these UK dates are an essential insight into the workings of RBMA.

Launched in Berlin in 1998, the Academy has found a new host city with every instalment, providing a month-long home to producers, vocalists, beatmakers, instrumentalists, and DJs from across the world. After two decades and fifteen countries including; Montreal, New York and Tokyo, Red Bull Music Academy will make its German homecoming for the first time since the 90s, offering what promises to be an inspiring and formative experience for those chosen to take part.

Encouraging UK applications to the Academy’s fast-approaching milestone (application forms can be downloaded from the Red Bull Music Academy website), a three-stop UK lecture tour across July and August is designed to give budding applicants a brief taste of what to expect if selected to attend the 2018 session in Berlin.

Lectures lie at the heart of Red Bull Music Academy. Since Jeff Mills became the first artist to ever take a seat on the RBMA sofa there have been countless names who have followed. A cultural exchange of ideas and a chance to explore the minds of industry leaders, these UK lectures are an unmissable opportunity for both fans and prospective applicants alike.

Alongside the lectures a schedule of parties will run parallel. Watch out for past Red Bull Music Academy lecturer Martyn and 2007 Toronto Academy alumnus Cosmin TRG as they take over over Phonox for the London fixture, rising bass don L U C Y and Sir Spyro at Bristol’s The Love Inn as well as the legendary Carl Craig and 2014 Tokyo participant Courtesy at Sub Club in Glasgow.

Follow the link below for full listings and ticket information