KMR Audio have announced the imminent availability of Bettermaker’s new C502V digitally-controlled 500 Series Stereo VCA Compressor. We got a rundown of the features at the AES convention in New York a couple of weeks ago. 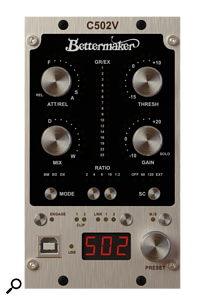 The Bettermaker C502V is a completely analogue compressor with three compression modes including two based on classic VCA designs. The first mode (BM) offers the most gentle compression and is intended for mastering applications. The SG mode recreates the classic VCA mix bus compression found on the SSL G-series (although Bettermaker and KMR don’t specifically say that) and features the same settings as the original it emulates including ratio, attack and release settings. The last mode (DX) reproduces the sound of the classic dbx 160A, making it suitable for drums and vocals. In this mode, attack and release controls are deactivated and become program dependent instead.

The Bettermaker C502V works in dual-mono, stereo or M/S modes and boasts a solo function to monitor each side independently. A unique 'lookahead' function is also featured for the first time on an analogue compressor, offering even more transparent behaviour. It also includes a 1:2 ratio that can be used for transient shaping or general expansion. It also features a sidechain high-pass filter with selectable frequencies and a Dry/Wet control knob for parallel processing.

Like the flagship EQ232P MkII EQ and EQ 502P and EQ 542 units, the C502V is digitally controlled via the on-board rotary encoders or plug-in controlled via USB when using the included native plug-in. Internally, the C502V can store up to 399 presets which can easily be recalled. The plug-in control offers all the benefits of working inside the DAW, with settings and automation being stored directly in your session which can be recalled perfectly every time. The USB can also be used for side chaining directly inside your DAW just like a plug-in.

A brand new enclosure now includes unit to unit internal linking which allows you to connect modules side by side without requiring additional USB cables.

The Bettermaker C502V is available to order in the UK and Germany from KMR Audio with the first shipment scheduled for later this year.