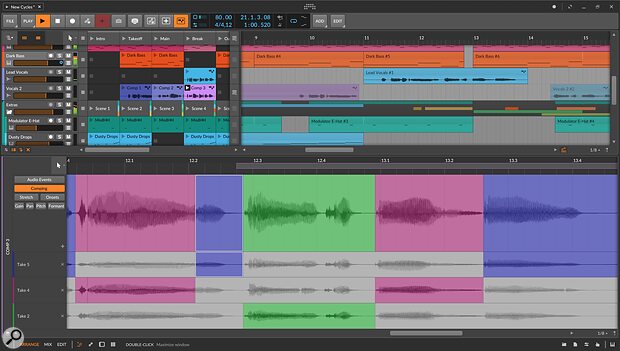 First trailed as a beta release earlier this year, version 4 of Bitwig's innovative DAW, Bitwig Studio, is now available. It introduces a number of new features, some of them commonly found in other major DAWs, and others a little more unusual...

In the former camp, we have Comping — the process of assembling a single perfect take from multiple recordings. Bitwig say that their version of it is particularly streamlined, though, with colour-coding for take identification, and a simple swipe-based means of selecting which part you want to keep from a given take.

A little less ordinary is a feature Bitwig call Operators. Building on their extensive implementation of parameter modulation, Operators add Elektron-style control over MIDI data, including things like probabilistic and conditional event triggering. This means you can set the probability (as a percentage) that a snare hit will land on a given beat, say, or tell your kick drum not to sound while a bass note is being triggered.

New to the final v4 release of Bitwig Studio is a library of what Bitwig are calling 'Anti-Loops'. The Anti-Loop bundle comprises over 100 clips, with sequenced notes and audio that take advantage of the new Operators and comping features. Bitwig describe this new file format as allowing for "boundless musical diversity and change," with the specially prepared comping clips holding "hidden variations for you to discover. Expert sound designers like Cristian Vogel, Polarity and Pat Cupo crafted these sounds to be added into any track or used as a first element to get your project started. When something arhythmic becomes rhythmic, or when a looping element feels a little variable and almost broken — that’s something worth building a track on." For a better idea of how Anti-Loops work, check out the video below.

Another new feature of Bitwig Studio 4 is called Expression Spread. Rather like MPE, this allows you to apply per-note automation to your MIDI data, but it goes a little further in that it allows you to set a range of values for a given parameter, with the actual value varying each time, for a more human feel.

Other enhancements include the ability to export to a wider range of audio formats, the ability to import FL Studio projects and Ableton Live sets, and compatibility with the new Apple M1 CPU architecture.

The Beta version of Bitwig 4 is available to download now, with the actual release expected early Autumn.