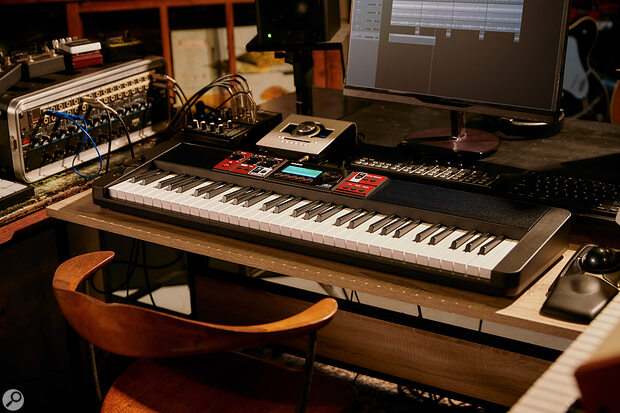 Casio are ringing in the new year with not one but four brand-new keyboards — one of which truly has a voice of its own...

The CT‑S1000V is described by Casio as a “vocal synthesizer”, and with good reason: it can take any lyrics you can think of and sing them back, using any of its 22 Vocalist presets. Lyric uploading and editing is handled by a companion app, called Lyric Creator (iOS/Android), into which you type your chosen words. These are zapped into the keyboard itself via USB, after which you can play the lyrics in a number of different modes.

Phrases can be sung all at once, according to the notes you assign to each word or syllable in the app. Alternatively, Phrase mode plays a new syllable for each note or chord you play, while Note mode works using keyswitches, where you assign different keys in the keyboard's bottom octave to words or syllables of your choice. SOS was given an exclusive preview of the technology in action, and we can confirm that the synth's intelligibility was most impressive. However, if a particular word is rendered a little oddly, the app allows you to get granular, by letting you swap in or out any of the 44 phonemes in the English language (at present, the CT‑S1000V is capable of singing in either English or Japanese).

The Vocalist types also warrant further mention. These include synthesized choirs, robots, whispers, talkboxes and vocoders (Daft Punk tribute acts will feel very much at home), and all are extensively editable. Variable parameters such as age and gender allow you to tweak the preset Vocalists to taste.

In other respects, the CT‑S1000V offers exactly what you'd expect from Casio: an extensive range of sounds (some 800, in fact, covering pretty much everything you could possibly need) powered by the acclaimed AIX sound engine, and an impressive selection of effects. The latter are arranged as three chains of four effects (each and all of which can be used simultaneously), and they include all the usual delay, reverb, modulation and distortion treatments, as well as a generous selection of guitar-amp models. The sounds themselves are impressive, and as well as including high-resolution, multi-sampled instruments with advanced features like key-release samples, they also include a number of classic Casio sounds, such as the CZ‑series trumpet patch.

In a further nod to Casio's past (specifically the SK-1), the CT‑S1000V is also capable of sampling. Up to 10 seconds of sample memory are available, and samples can be captured either via the keyboard's stereo mini-jack input, or using Bluetooth. The CT‑S1000V ships with Casio's WU‑BT10 Bluetooth adaptor, which as well as facilitating wireless sampling, allows you to stream audio into and MIDI both to and from the keyboard.

For practice and performance, the CT‑S1000V boasts a pair of in-built speakers, while buskers will delight at the fact that, as well as drawing its power from the included PSU, the new keyboard is capable of running on six AA batteries.

The CT‑S1000V is available now, and priced at $679.99. If the above sounds appealing but you can live without the vocal synthesizer, the new CT-S500 (below) is essentially the same instrument but without the Vocalist engine, and costs just $499.99. 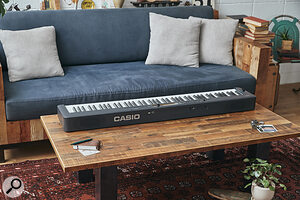 Casio CDP-S360Next up are two new additions to Casio's CDP-S series of digital pianos. The CDP-S360 (right) supplants the CDP-S350 as the top of the range instrument, and doubles its predecessor's polyphony from 64 to 128. It sports a pair of built-in speakers, a full-size 88-note hammer-action keyboard, and boasts some 700 different sounds plus 200 rhythm accompaniments.

At the other end of the scale, the new CDP‑S110 (pictured below) is described as an 'entry-level' instrument, yet it still includes an 88-note hammer-action keybed, a pair of built-in speakers, and 10 tones offering a choice of all the classic keyboard sounds, including upright and grand pianos, electric pianos, organs and more. 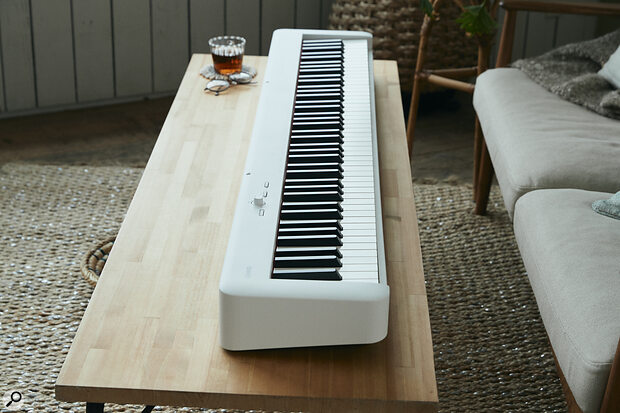