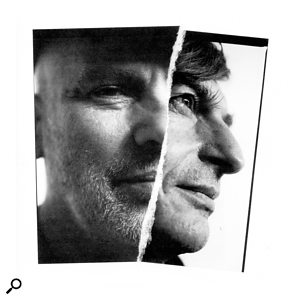 Credit: Hayley Louisa BrownPioneering electronic musicians and Ninja Tune founders Coldcut are set to mark their 30th Anniversary with a series of groundbreaking audiovisual concerts taking place across Europe, kicking off with a headline show at London’s Village Underground. The band have been busy in their thirtieth year. As well as releasing their hotly anticipated new album Outside the Echo Chamber with Adrian Sherwood, the duo’s first for ten years, Coldcut have also been developing new tech throughout the year, as well as brand new music and art creation software.

The anniversary concerts will see Coldcut’s classic visuals 'repainted' using ‘Style Transfer’, a new technique which harnesses AI technology to interpose the visual tone of one image over another. This will be the official launch of this AI tech in a live environment, arising from a collaboration with the Deepart team from the University of Tubingen, who invented the technique. The duo have also just released their free app Pixi Player, which they use live to automatically make abstract art whilst they play.

As well as their anniversary shows, Coldcut have kept themselves busy creating MidiVolve, a piece of composition software for Ableton Live that offers producers a new set of tools to develop novel riffs and rhythms. Launched earlier this summer, MidiVolve has already become Ableton’s best selling pack so far this year.

Combining this with their Jamm app, the duo are lining up a series of fresh musical collaborations with electronic music contemporaries. Black and More are also developing new top-secret FX hardware with a leading modular synth crew, offering a new way of processing sound for amateurs and pros alike, with a release expected before Christmas.

Coldcut have lain at the forefront of mashup culture for decades, and these new projects are just the latest chapter in a career spent bringing remixing – of art, technology, and ideas – into the mainstream. Matt Black and Jon More have never been renowned for their ability to sit still; on 21st September, neither will their audience.