Native Instruments have today announced a major overhaul to both their Maschine and Komplete Kontrol S products, adding some attractive new features and drawing hardware and software even closer together.

Alongside a new look, which is a further refinement of NI’s sharp-edged industrial aesthetic, one of the most eye-catching features of the Maschine Mk3 and Komplete Kontrol S49 and S61 Mk2 is their upgraded displays. Like the top-of-the-range Maschine Studio, both the Maschine Mk3 and the new Komplete Kontrol keyboards feature a pair of high-resolution, full-colour screens that let you browse sounds, edit parameters and, in the case of the Maschine, slice samples without having to turn back to the computer screen. 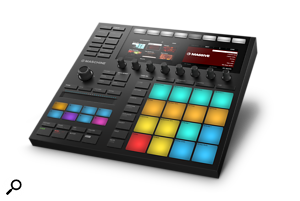 The new models also feature a four-directional push-button rotary encoder to make navigation easier, while the Maschine’s pads have got significantly larger. The designers have been careful to keep the centre-to-centre distance between pads the same as previous versions, filling in the gaps between them, so as not to throw off finger drummers. Both Maschine Mk3 and Komplete Kontrol Mk3 keyboards can now also be bus powered, making mobile production and performance even easier.

NI have been listening to their user base, and with the Komplete Kontrol S49 and S61 Mk2 semi-weighted controller keyboards, they’ve ditched their pitch and mod touch strips in favour of more familiar chunky, rubberised wheels. The touch strip still makes an appearance but is now horizontally oriented beneath the wheels. The same touch strip, which features a row of tiny indicator LEDs above it, appears on the Maschine Mk3, where it can be used to control pitch, modulation, effects parameters and even to ‘strum’, sounds. Another very notable, though less visible, addition to the Maschine is full audio interface capabilities. The Mk3 can act as a stereo 24-bit/96kHz interface, with stereo line and (dynamic) microphone inputs plus line and headphone outputs. 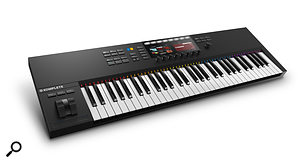 With a number of new buttons that give direct access to a range of often-used functions, the Maschine Mk3 and Komplete Kontrol Mk2s promise an improved workflow and, as you would expect, full integration with NI’s range of software and the growing array of plug-ins that support their NKS control standard. The Komplete Kontrol Mk2 keyboard also gains mixer control for Maschine, Logic and Ableton, giving it more of a workstation feel. Another really neat new feature is the addition of Previews. This should speed up patch diving immensely, letting you audition sounds immediately without having to open a large sample library, and it applies to all NI instruments and some 400 other third-party NKS instruments.

These impressive-looking new devices will be available from October, priced €599 for the Maschine Mk3 and the Komplete Kontrol S49 Mk2, and €699 for the Komplete Kontrol S61 Mk2. Although the 25-key version of the keyboard will not be getting the Mk3 treatment, we expect to see an 88-key, fully weighted version introduced next year.