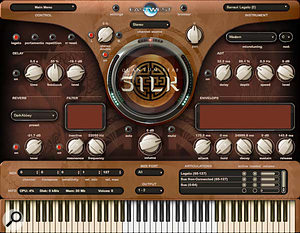 Sample-based software instrument specialists EastWest have announced their latest product, Silk. It’s a collection of string and woodwind instruments from countries along the Silk Road, the historic trading route that merchants travelled to bring their wares to Europe.
Included are over 25 instruments from China, India and Persia, plus a 30-piece middle-eastern string section. Each instrument has been played by ‘master’ players, and then meticulously multisampled by EastWest with extensive articulations, numerous alternate samples (to avoid repetition), and full phrases “to give the feeling of smooth effortless performance”.
Silk runs on EastWest’s Play engine as a DAW plug-in or in stand-alone mode. In-depth scripting in Play allows for automatic transposition on the fly, so if the user wants to play a riff on, for example, a Chinese Erhu, in an arabic scale, they can choose a scale from a list of ‘microtunings’, select their key, and only samples of notes in that key will be triggered. This, says Silk producer Nick Phoenix, makes the virtual instrument incredibly easy to play and very realistic-sounding.
In other EastWest news, the company have updated their Play engine to version two. The main new feature is the facility to edit Play patches, using the same software tools as the EastWest developers have at their disposal.
For further information, visit EastWest’s web site.
www.soundsonline.com
Previous storyNext story