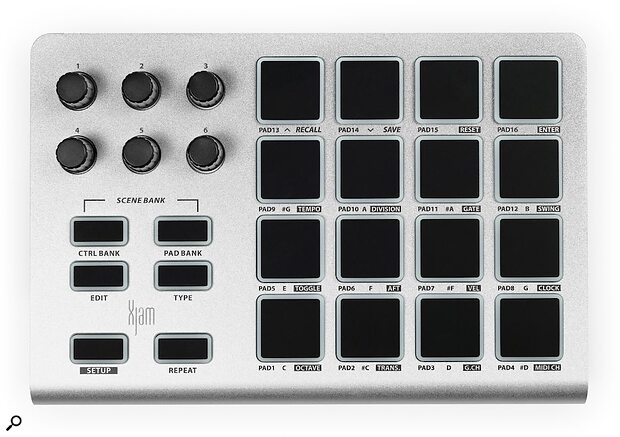 ESI have announced the release of Xjam, a portable bus-powered MIDI performance controller housed in a solid aluminium chassis.

The Xjam features 16 RGB backlit pads with polyphonic aftertouch, capable of sending MIDI CC, Program Change or MMC messages. Six endless encoders are present, which are able to send pitch, Program Change or aftertouch in addition to MIDI CC messages. Dedicated editor software is provided to allow users to configure the device to their exact requirements, and there are 48 user-programmable scenes that can be stored and recalled instantly.

A MIDI output is provided on a 3.5mm TRS connector, and the Xjam can be used as a standalone MIDI controller without a computer connected. Power is delivered via USB, either from a host computer or USB power supply when used as a standalone controller. A foot-switch input is also present to allow the connection of a sustain pedal.

The Xjam is shipping now, priced at 149 Euros.ESI say the Xjam will be available later this year, with pricing to be announced.