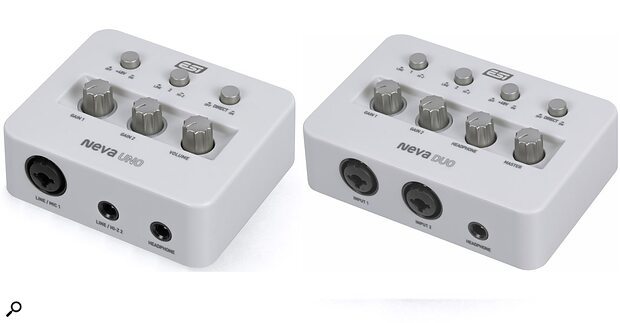 ESI have announced the launch of two new affordable audio interfaces, the Neva Uno, and Neva Duo. Designed as a solution for beginners and users on a budget, the devices offer low-latency performance, 24-bit / 192kHz operation, and come supplied with a software bundle that includes Bitwig Studio 8-Track and Steinberg WaveLab LE.

The Neva Uno offers a single microphone preamp with +48V phantom power available. The input will also accept line-level signals, with connectivity provided by an XLR/TRS combo socket. An additional line-level / Hi-Z instrument input is also available, which is present on a quarter-inch TRS connector. The Duo is equipped with two inputs that will accept microphone, line-level, and instrument signals, all of which can be connected via a pair of XLR/TRS combo sockets, with a button on the top panel allowing users to select the appropriate source.

The top panel of each interface houses a gain control for the input channel(s), as well as separate headphone and main output level controls. There is also a switch to engage phantom power for the microphone input(s), and zero-latency monitoring of input signals is also available courtesy of a Direct button.

Each of the interfaces is capable of 24-bit / 192kHz operation, and ESI specify dynamic range figures of 97dB (A-weighted) for the A-D converters, and 107dB (A-weighted) for the D-A converters. Up to 50dB of gain is available when using the XLR microphone inputs. Both units are bus-powered via USB-C, and are supported on PCs running Windows 10 or above, and all modern Intel and Apple Silicon Macs (no minimum macOS requirement has been specified). The Uno measures 105 x 90 x 40 mm, and the Duo measures 130 x 90 x 40 mm.

Both of the interfaces are supplied with a software bundle that aims to provide users with all they need to start recording and mixing their songs or audio content. Bitwig Studio 8-Track is provided along with the Bitwig Essentials Package, offering eight tracks of audio and MIDI recording and sequencing along with a selection of presets and sounds.

Steinberg’s WaveLab LE is also included, providing a simple solution to editing and mastering, whilst Cubasis LE offers a recording, editing, and mixing solution for iPhone and iPad users. Lastly, inTone 2 ESI Edition from Audified offers multi-track playback and mixing facilities, as well as the ability to act as an effects host for the included GK Amplification 2 LE and ampLion Free bass and guitar amp simulators.

Both interfaces will begin shipping to retailers in Europe this month (December 2022), with worldwide availability to be confirmed soon. The Neva Uno is priced at €69, and the Neva Duo at €85.