Published 27/8/04
Musical Adventure full of Eastern Promise
What do you know about Chinese music? Most people in the West would have problems with the answer, and this is where a group of SOS readers from the University of Westminster, London, come in. Devonians Barry Bix, Chloe Watson, and Dave Thynne, with Pete Mills from Birmingham, have been planning for some time to base their final year project in China. Entitled Far Flung Folk – The People’s Music Project, the students aim to ‘Explore, through musical exchange, Chinese folk culture, traditions and beliefs; past and present’. 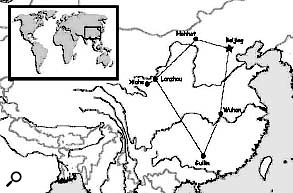 From 22nd September until 2nd November, their itinerary in China takes in Beijing, Wuhan, Hohhot, Xiahe, Lanzhou, and Guilin, where they will be recording live music, sound, and video, as well as performing in local schools. Sounds like great fun! Pete Mills reports how, at the start of their project in September, the team will be working all day with 120 children, aged eight to 12, at BISS, a local school in Beijing. Their programme begins at eight in the morning, just two days after setting off from Heathrow, so, due to the jet lag, this will effectively be like performing all night beginning at midnight! However, this sounds suspiciously like normal student hours…
The students hope to create more awareness here of East Asian folk music culture, which is presently under-represented in Western societies. They may even record performances which have never been recorded before. Dave Thynne asks: ‘Have you seen Baraka? It’s an unbelievably good cinematography film of the world, which inspired us to do the trip, along with other projects such as ‘One Giant Leap’. It will be difficult, but I believe when we travel to some of the isolated villages, we will be able to capture completely original material.’ 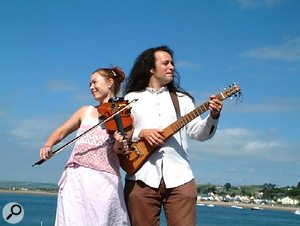 Barry Bix is an experienced traveller, and speaks Mandarin Chinese, having previously cycled around Asia for 10 months. He and his partner Chloe Watson (above) will form the backbone of the performing aspect of the team, while Dave and Pete will film and record. ‘We hope to really wow the crowds with Chloe’s superb violin playing, and my erratic but entertaining guitar playing!’ says Barry. Pete points out ‘We’ve already done a recording project in Devon, where we recorded a little known but extremely talented folk guitarist called Jim Crawford. We learnt a huge amount from this, not least how to be patient and how to film effectively.’ This last point makes reference to how they ended up with 10 hours of footage which had to be edited down to one hour. ‘We found that many shots were useless because we hadn’t held the scene for long enough, and there would always be a camera wobble just before the shot became usable,’ says Dave somewhat mournfully.
While SOS and other sponsors are contributing to the cost of the trip, the members of the team have been undertaking various fundraising activities, including a sponsored 12-hour singing session, to raise money for much-needed recording equipment. The group have decided to travel light, attaining a balance between efficiency and quality. They will hopefully be taking two Canon MVX35i digital video cameras, plus two AKG C1000s mics, that can be used to record just high quality audio, or both audio and video. The ability to record audio onto Mini DV tapes means that taking a laptop for audio storage is unnecessary. ‘We also don’t want to take the spontaneity and secrecy out of our live recordings,’ says Pete. ‘We may get the chance to record live Tibetan chanting, and traditional Chinese theatre, and the last thing we want to have to do is whip out a laptop and shout to each other – Have you got a hot signal yet? Oh no, wait… I think the USB driver needs reinstalling!’ Not that they eschew the merits of laptops, but the addition of MiniDisc recorders and a digital 4-track which runs on batteries should prove more than adequate. ‘The Boss BR532 also uses SmartMedia cards,’ says Barry, ‘so we might opt for that. There’s also the Korg PXR4, which seems very good.’ Other equipment includes two high quality clip-on mics, two digital cameras, and one analogue camera, and an assortment of storage devices such as SmartMedia cards, and USB pens.
Not only will they be learning new recording and storage techniques, but also a huge amount about a musical culture which is relatively unknown to many people, and bringing home enough material for several albums, a photography exhibition, a sample CD, and even a DVD! ‘Although the filming won’t be broadcast quality’, says Dave, ‘It will be wonderful for students at Westminster to see how we worked and how the local people reacted to us.’ ‘Not only that,’ says Chloe, ‘but we will also try to capture the essence of a culture which is gradually being taken over by Western influences’.
I'm sure fellow SOS readers will wish the team well with this interesting venture, and from time to time they have promised to post updates on their Chinese activities in the new SOS Forum.