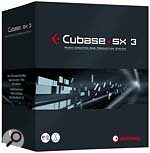 The latest of incarnation of Steinberg Cubase has arrived. Cubase SX 3, which will beginning shipping next week, boasts numerous new features, including support for 64-bit computing and up to 4GB of RAM when used with 64-bit processors, like AMD’s Opteron, and operating systems, like the forthcoming Windows XP 64-bit edition.
The new Audio Warp function allows real-time pitch-shifting and time-stretching, with support for the Acid file format; loops in this format will snap to the song tempo and follow any tempo changes. The Play Order Editor is a pattern-based arranging tool, while the Inplace Editor allows MIDI event editing from within the main project page.
The Freeze function, introduced in SX 2 and previously restricted to VST Instrument tracks, has now been extended to audio tracks with insert effects, allowing users to free up more CPU. Version 3 also includes delay compensation for external hardware effects, controlled directly from the VST mixer, track colour-coding and user-definable window sets which can be called up using key commands.
Cubase SX 3 will cost the same as SX 2 — £569.99 — and updates from SX versions 1 and 2 cost £99.99. If you bought SX 2 after the 15th of July this year, the update is free but subject to a £9.99 handling charges. Cubase VST, SL 1 and SL 2 owners can upgrade for £299.99.
There’ll be a closer look at Cubase SX 3 in next month’s Cubase Notes. 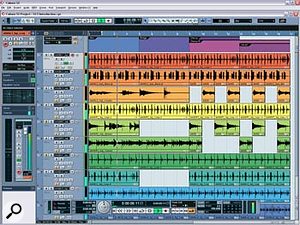