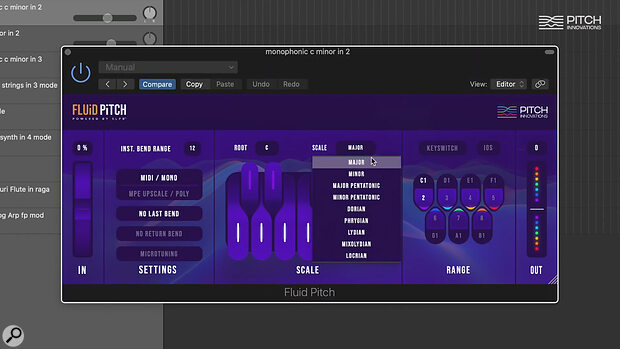 Pitch Innovations are a new company founded by Bollywood score composer and music programmer Krishna Chetan. Their debut product is called Fluid Pitch, and it's a MIDI plug-in that adds advanced pitch manipulation — including MPE — to any pitch-wheel-equipped MIDI keyboard.

Standard pitch-wheel behaviour on most instruments is to provide ±2 semitones on any note played, which Pitch Innovations rightly point out is unlikely to be ideal for every note in a scale. One of Fluid Pitch's key functions is to scale your pitch-wheel data so that, for example, the wheel will go up two semitones but down just one, if it detects that you're playing, say, the third note in a minor scale (as selected in the plug-in). Fluid Pitch offers a selection of nine different scales, including harmonic major and minor, pentatonic major/minor, and also a range of modes (Dorian, Phrygian, Lydian, Mixolydian and Locrian). You can customise these scales by activating and deactivating certain notes (much as you can in Auto-Tune and other pitch-correction processors), and you can even set custom pitch-bend ranges, so you can whizz up and down in seconds, thirds, fourths, fifths, sixths or sevenths (or just a straightforward octave), all while remaining in scale.

Perhaps even more impressive, though, is Fluid Pitch's 'MPE Upscale' mode. This essentially adds MPE to any keyboard with a pitch wheel, by sending different amounts of pitch-bend to different notes, again depending on the scale you select. So, say you're playing a tonic triad in C-major. If you push your pitch wheel up, it'll bend the root and fifth up a whole tone, while only bending the third (E) up a semitone (to F). This is all subject to the same customisations as in monophonic mode, so you can smoothly bend between almost any chord you like in a given scale. While in MPE Upscale mode, Fluid Pitch will also map your mod wheel (if you've got one) to 'vertical' MPE movement (called Slide by ROLI, among others), and aftertouch data (again, if your keyboard supports it) to the Pressure gesture.

Another feature that will really appeal to keyboardists is the ability to apply pitch-bend data in one direction only. To demonstrate why this would be useful, Pitch Innovations use the example of legato: if you want to play an ascending scale in which the first two notes are played legato (via pitch-bend), you'd normally have to release your pitch wheel at exactly the right time: after playing the second note in the scale but before playing the third. Even then, you'd need to leave a slight gap between the second and third notes, or you'd hear the pitch wheel being dropped back down again. The other way to play it would be to hold the pitch wheel up, and then play the rest of the scale two semitones flat on your keyboard — which is a recipe for mistakes. With 'No Last Bend' (which ignores the most recent pitch wheel motion) or 'No Return Bend' (which blocks the 'wheel drop') enabled, you can perform your initial slide just as you normally would, and then simply ignore the pitch wheel and play the rest of the scale on the usual keys.

Finally, Fluid Pitch offers a powerful micro-tuning section, which you can either use globally (for non-standard temperaments), or in conjunction with your pitch-bend wheel and the Fluid Pitch scale modes, for playing realistic sitar parts, emulating a B-Bender vibrato arm, or any other instrument or style that relies on sub-semitone intervals.

The MIDI plug-in (which works in every major DAW) is available now, for the introductory price of $45 (normal price $75). Pitch Innovations are also apparently working on a companion iOS app, which will let you control the plug-in and invoke presets, the idea being that you can keep your iPhone handy on top of your keyboard, and switch between settings in an instant.

Check out the video below for an excellent overview of Fluid Pitch's features.