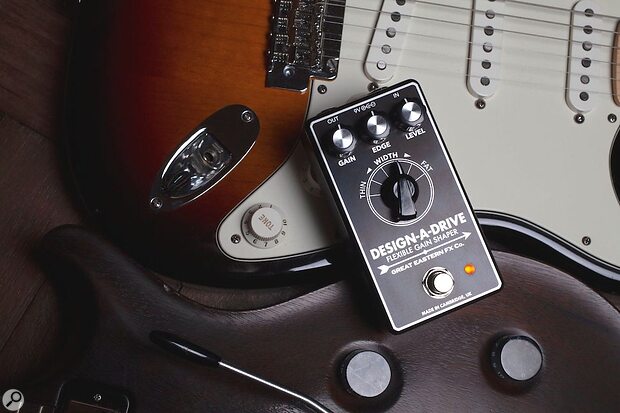 UK-based guitar pedal makers Great Eastern FX Co. have released the Design-a-drive overdrive pedal. Recognising that many options on the market work more successfully with certain combinations of amp and pickups than others due to their fixed frequency controls, the company have equipped their latest offering with a pair of unique tone-shaping controls that allow users to “re-design” the pedal on the fly to suit their guitar and amp of choice.

“There are a bunch of design decisions that go into every overdrive circuit that dictate how compatible it will be with different guitars and amps,” Great Eastern FX Co. founder David Greeves explains. “We wanted to create a pedal that would let you tweak the parts of the circuit that really make a difference so you can make these decisions for yourself. At the same time, we wanted to condense these adjustments down into as few controls as possible so that the pedal could stay really simple and easy to use. We want you to be able to plug in, quickly find a sound that inspires you and then get on and play.” 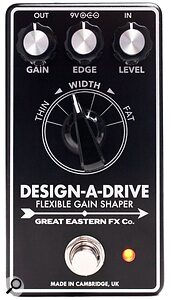 Despite its versatility, the pedal's simple front panel features just four controls.The two proprietary controls designed for the pedal have been dubbed ‘Width’ and ‘Edge’. Edge controls the top end of the frequency spectrum and works by adjusting two separate filters simultaneously, the first being a gentle treble roll-off, and the second engaging a more intense cut in the high presence region. This control also subtly affects the circuits hard-clipping diodes, which the company say allows users to dial in their desired amount of bite, grit and presence. The Width control is a six-position rotary switch, with a labelled range from ‘Thin’ to ‘Fat’. This control is dedicated to shaping the pedal’s mid-range response, dictating where across the frequency spectrum the amp gets pushed, and by how much.

Lastly, Gain and Level controls allow the pedal to cover all grounds, from a clean boost through to a powerful tone shaper, either on its own or stacked with other drive and fuzz units. Great Eastern FX say that the Design-a-drive can be as transparent and true to the user’s original tone as possible, or be configured to do the exact opposite and make single-coils sound “thick and meaty” or humbuckers “lean and incisive”.

Check out the video below to see and hear the pedal in action. We also have one here at Sound On Sound, with a full review in the works.