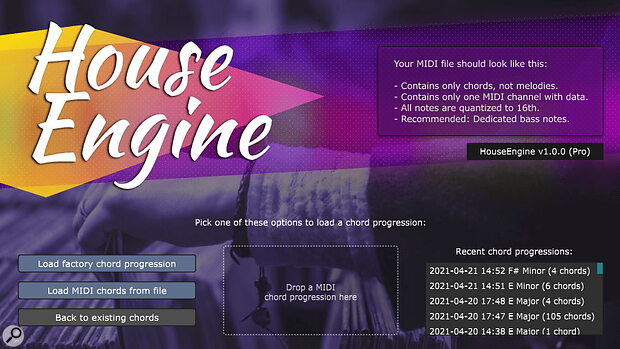 German software company FeelYourSound have just launched a new product: HouseEngine. A VST/AU plug-in, HouseEngine essentially turns basic MIDI chord progressions into full-blown tracks, by analysing your chords (a selection of progressions is provided to get you started), identifying a suitable key signature for them, and then generating additional parts that will fit.

As its name suggests, HouseEngine is intended for house music, though its makers say early testers have used it for other genres with excellent results. It includes a selection of house-appropriate preview sounds, so you can audition its auto-generated parts, but once you've decided which ones work for you, you can either drag-and-drop the parts to another track on your DAW for playback by your own software or hardware synths, or (if you're using the VST version) simply route HouseEngine's MIDI to another track.

The presets are divided up into a number of categories, such as Bass, Keys, Lead and Strings, and once they've been generated, you can shift them up or down an octave, apply swing, and modify the detected key signature if the automatically chosen one isn't right for you.

HouseEngine is available in two flavours: the Standard edition, which costs €45, has all the features mentioned above, while the Pro edition (€360) includes a mass MIDI export function, so that you can output hundreds of MIDI parts in one go, as well as a licence to sell the generated MIDI parts commercially. If you're quick, you can get either version for their reduced introductory prices (30% off the Standard edition, and 50% off HouseEngine Pro), using the codes 'IntroDeal' or 'IntroDealPro' in the FeelYourSound online shop.

Check out the video below to see HouseEngine in action.