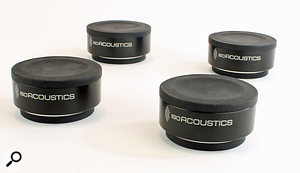 IsoAcoustics make their NAMM show debut later this week (Booth 7117, Hall A) and are showing off their brand new Iso-Puck, the company’s new low-profile, highly flexible and scalable, round model of acoustic isolators designed especially for pro audio speakers and subwoofers as well as musical instrument amplifiers.

The Iso-Puck is designed to deliver the same clarity and openness that IsoAcoustics has become known for, and is exceedingly discreet, having an extremely low profile, with a height of only 1.18 inches (30mm). Just 2.3 inches (60mm) in diameter, the Iso-Puck’s round shape makes it flexible enough to be ideally positioned on any surface, including the narrow spaces atop a meter bridge.

Iso-Pucks are highly scalable, designed to be used in multiples to match the weight of each speaker or amplifier. With a weight bearing capability of 20lbs for each puck, three or four of them can be combined to support the weight of the particular product requiring isolation. Repositioning is also simplified with the rounded Iso-Puck, with the IsoAcoustics logo defining the front of the unit, allowing them to be configured and turned easily to suit the supporting surface.

Accoding to IsoAcoustics, the multipart isolation construction of the Iso-Puck allows it to move to isolate and manage the energy, using the same patented concepts as other acclaimed IsoAcoustics products. Iso-Puck features a flange suction cup on the top which adheres to the speaker or top surface, as well as a bottom suction cup flange which adheres to the supporting surface, with a sliver ring around the bottom of the isolator to maintain shape. IsoAcoustics describe the principle by which the energy is transferred to the core of the multipart isolator in between — resisting lateral movement and offering superior isolation. This is supposedly what results in a markedly improved clarity, three-dimensional openness, and uncolored sound.