Keith Barr, probably best-known to Sound On Sound readers as the founder in 1984 of Alesis, died on August 24th 2010 at the age of 61. Keith was an engineer at heart, though he also loved music, which led to him being a founding partner in MXR, the pioneering guitar pedal company back in 1973. He went on to set up Alesis Corp in 1984 with Russell Palmer and Vice-Chairman Robert Wilson, and was responsible for bringing the first affordable digital reverbs (the MIDIverb) to the home recording market as well as the ground-breaking ADAT 8-track digital tape recorder. He confided that the reason he wanted to design a digital reverb was because he loved Billy Idol records and wanted to be able to recreate that sound! 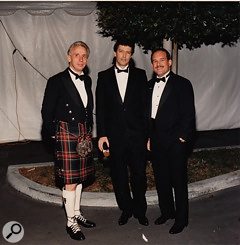 During several of my conversations with Keith, he told me that he found designing ASIC integrated circuits the most rewarding part of his work, and when he left Alesis he moved into full-time semiconductor design, living in Taiwan. He was president of Spin Semiconductor at the time of his death and was author of ‘ASIC Design in the Silicon Sandbox: A Complete Guide to Building Mixed-Signal Integrated Circuits’.

Keith was a brilliant engineer with a wide-ranging knowledge of subjects as diverse as atomic physics and microbiology. I think it would be fair to say that while he helped start several successful companies, his main focus remained on the science behind the products. He was a unique individual and I know that he will be greatly missed by all those fortunate enough to know him.