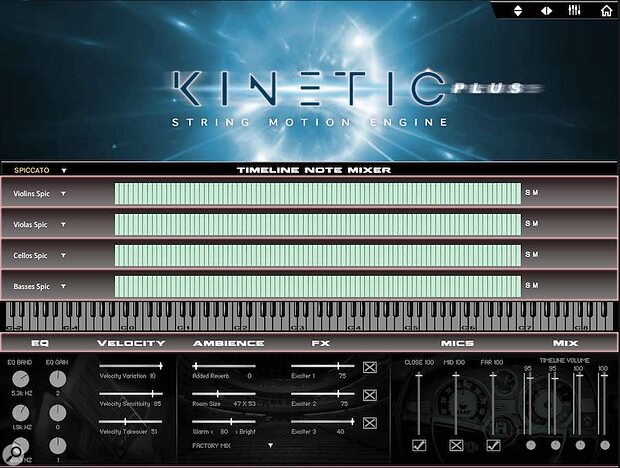 Kirk Hunter Studios have announced the release of Kinetic Strings Plus, a virtual instrument and sample library that focuses on creating string ostinato patterns. Violin, viola, cello, and double bass sections are included, and can be played and programmed separately within one instance of the instrument thanks to independent timelines.

All of the samples have been captured at First Presbyterian Church in Santa Monica, with the instrument’s sections featuring an ensemble of 16 violins, 10 violas, eight cellos, and four double basses. Each of the four timelines can contain any instrument section as well as any articulation, with the library boasting spiccatto, marcato, detache, pizzicato, col legno, and bartok pizzicato playing techniques. 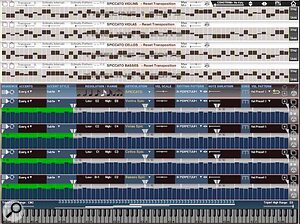 Kinetic Strings Plus allows users to apply separate transposition and velocity variations to each loaded instrument section. Each of the timelines can contain four regions, with a selection of overlap, cycling, and repetition options allowing users to introduce some variation into their patterns. A range of rhythmic pattern presets are included, along with a selection of velocity presets which can be applied either globally or to individual timelines, allowing users to create their parts by simply holding down a note or chord.

In addition to the rhythmic and dynamic variation, Kinetic Strings Plus also offers a collection of built in intervals, scales, and arpeggios, and each timeline can now be transposed up or down by up to an octave. As well as the built-in options, the instrument also allows users to record in their own notes, rests, and velocities in order to create their own custom ostinatos.

A Mixer page provides some detailed level control over the four instrument sections, and even offers volume control over individual notes within patterns, as well as a three-band parametric EQ. There are also a range of features aimed at increasing the realism of programmed parts, with options for randomising note velocities, and a scaleable Un-Quantize which introduces some variation into the repetition rate.

For an overview of Kinetic Strings Plus’ features, take a look at the video below.

Kinetic Strings Plus requires the full version of Native Instruments Kontakt 6.6.1 or above. If loaded into the free Kontakt Player, the library will only run in Demo Mode. PCs running Windows 7 or newer are supported, along with Macs running macOS 10.9 and higher. 7.7GB of disk space is required.