HUM Audio Devices have announced the upcoming UK launch of their latest device, the LAAL (Look Ahead Analogue Limiter). Over two years have been spent developing the unit, an effort which HUM say has resulted in the production of a limiter that many mastering engineers have dreamed of, but never had.

The look-ahead functionality is provided by a fully analogue (0.2ms) delay line, which allows the unit to respond to even the fastest peaks with minimal side effects and without compromising sound quality. LAAL also features a dynamic transient function, which HUM say is a unique feature, and is responsible for regenerating transients proportionally to the amount of limiting applied. The device is also equipped with an adjustable stereo width circuit, which has been designed to increase the perceived spaciousness in a mix without sacrificing low-frequency energy in the centre of the stereo image, whilst also retaining mono compatibility.

No compromises have been made with the design or build, with HUM carefully selecting each component in the audio path and even designing their own where they felt it was necessary. The unit is precisely calibrated, with <0.1dB accuracy between left and right channels, and a thermally compensated detection circuit to ensure stable and repeatable performance results in all studio conditions. 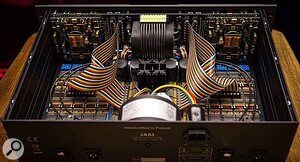 Each component in the limiter's audio path has been carefully selected, and the power supply has been designed by HUM Audio Devices specifically for the LAAL. Large input and output level controls for each channel provide a -10 to +12 dB gain range, adjustable in 2dB steps, whilst a trim control offers an additional, finer adjustment ranging from -1 to +1.2 dB in 0.2dB steps. Release times of 2, 3, 10, 30, 50 and 100 ms are available, and all of these front panel controls are presented on stepped rotary switches. Large input and gain reduction meters are present for each channel, and a selection of switches in the centre of the device provide access to functions such as peak hold, dynamic transient, and stereo width processing. The device features a limiter bypass as well as a hard bypass, and in addition to stereo operation, the detection circuits for each channel can be un-linked in order to use the LAAL as two independent mono limiters.

Specifications are impressive, with an A-Weighted self-noise measurement of -102dB (with the device set at 0dB in/out), a THD+N figure of 0.026% (1V RMS, 1kHz signal at max gain reduction), and frequency response quoted as being 0.3dB down at 20Hz and 30kHz.

The unit occupies 3U of rack space, measures 314mm deep, and weighs 9.6kg. Balanced stereo inputs and outputs are provided on XLR sockets, and power is delivered to an internal PSU via an IEC connector.

The LAAL was released in September 2022, with the first batch selling out in less than a month. The official UK launch will be on Saturday 15 October 2022, at the Pro-Audio Show in Ealing, London.

Pricing information, along with details on demonstration loans can be obtained from Sound-Link Pro Audio, who are distributing LAAL in the UK.