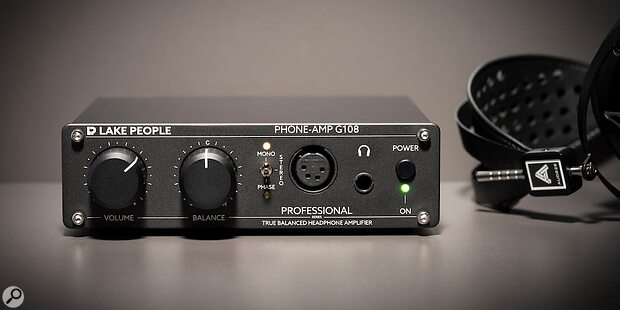 Two headphone outputs are available on the front panel, one of which utilises a four-pin XLR connector to deliver a stereo output to feed balanced headphones, with the second offering the more common unbalanced signal via a quarter-inch TRS connector. Volume and left/right Balance controls are placed on the left side of the panel, with a central toggle switch offering stereo and mono operation modes, as well as the option to reverse the polarity of the left channel in order to help users identify any phase issues.

Both balanced and unbalanced inputs are provided on the G108's rear panel.The G108’s rear panel provides a balanced input via a pair of XLR connectors, with a pair of RCA connectors offering an unbalanced input. An input selector is present, allowing the user to leave two sources connected and switch between them as needed. The panel also houses an IEC connector, which feeds the device’s internal power supply.

Lake People say that the G108 will effortlessly drive headphones with impedances ranging from 8 to 600 Ohms, with the amplifiers capable of delivering up to 2700 mW of power. The device also utilises a pre-gain circuit which is used in other Lake People and Violectric products, with the amount of pre-amplification adjustable between -18 and +18 dB inside of the device in five steps, allowing users to optimise the unit’s gain settings to suit their chosen headphones.

In terms of specifications, the G108 boasts a frequency range of 2Hz to 150kHz between -3dB points, a signal-to-noise ratio of 122dBA, and a Total Harmonic Distortion and Noise figure of less than 0.001% (measured at -1dBFS). The device is housed in a desktop enclosure, and measures 168 x 49 x 145 mm.