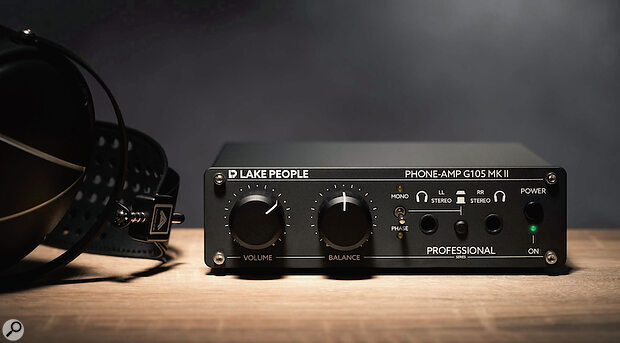 Lake People are launching the G105 Mk II, a professional 2-channel headphone amplifier that features a host of improvements over its predecessor. Handmade in southern Germany, the G105 Mk II is the result of ongoing development and optimisation from their in-house experts, speaking to the company’s mantra: “Tools not Toys”.

Building on the already impressive specs of the G105, the G105 Mk II raises the bar with improvements to output, signal-to-noise ratio and crosstalk attenuation. Now offering up to 2,300 milliwatts of output power, the G105 Mk II will comfortably power the majority of professional headphones. This amp shines in high-fidelity applications thanks to many refinements made at their Lake Constance headquarters, giving a pristine and unaltered sound image.

Along with the beefed-up output power, the G105 Mk II further caters for headphones by providing a pre‑gain switch that allows the user to select one of five different gain levels. With presets of -6, 0, +6, +12 and +18 dB, any pair of cans can be driven at their optimal level no matter their impedance, delivering a clear signal and precise level control with the volume knob.

The G105 Mk II now features both RCA and XLR inputs, allowing connection to balanced or unbalanced sources, selectable via a switch. The input channels can be played back in stereo simultaneously to the two headphone outputs, as would be expected, but by pressing the split button on the front panel, the signal splits into two mono signals, with L and R going separately to each output. This useful feature allows for two headphone users to receive different mono mixes.

As well as its Volume control, the tidy and compact front panel also houses a 25mm aluminium Balance control to adjust the difference in volume between the two headphone outputs, a phase (polarity) invert, and a setting to accommodate a mono input. All in all the Lake People G105 Mk II looks like a robust headphone amp with a versatile set of features, suitable for a range of high performance applications.

Available from specialist dealers from February 2022 for the suggested retail price of €404.19 (excluding VAT).