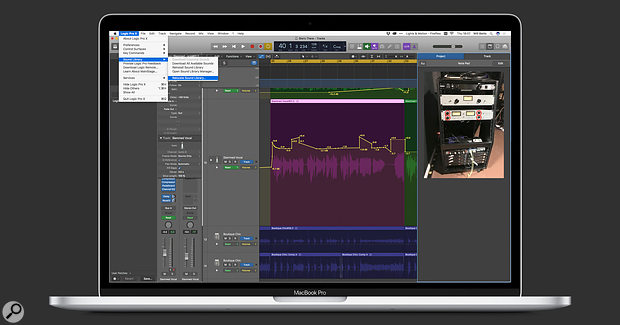 The Logic 10.4.2 update may sound perfectly unassuming but what it offers could make you jump for joy. Top billing goes to the newly introduces ability to easily relocate Sound Libraries to external hard drives.

This is a huge deal for two reasons: Logic’s Sound Libraries, if you download them in their entirety, are huge. Secondly, Apple only offer solid-state drives for internal storage on their laptops, many of which are 256GB in capacity or less in the base configurations. So, unless you’re happy dropping hundreds of pounds (128GB to 1TB SSD upgrade from Apple costs £800!) on a larger internal drive when you spec the machine, you’ll find your hard drive filling up very fast.

The next quietly significant feature is that dragging one automation point over another now aligns them vertically. If you’re in the business of tweaking automation endlessly, this will undoubtedly come in handy.

Engineers working with a hybrid setup will also rejoice in the knowledge that you can now save photos to the project or track notes area, meaning recalls of your hardware settings can be saved within projects.

As far as mixing goes, one big change is a new mixer mode that allows channel strip fader and pan controls to be used to set send level and pan. If you want a send panned to a particular place in the stereo field but want the main signal to be panned elsewhere, this is great.

There’s also some clever stuff in here about Smart Tempo and how it can now analyse tempo data across multi-track recordings and analyses MIDI data without a metronome, but there's too much to get into here. Regarding the MIDI portion of this, a similar feature was recently introduced to great effect in Ableton with Capture, so we're looking forward to trying that out.

MainStage also gets a massive upgrade, gaining many instruments and effects that were previously only available in Logic Pro X.

What’s New In MainStage 3.4
General
• Channel Strip MIDI input inspector allows any MIDI CC data to be filtered, transformed or passed through
• Text notes can be added to the bottom of channel strips
• The Metronome is now fully configurable, with separate settings for Bar, Group, Beat, and Division
• This update also contains numerous stability and performance improvements