One need only look at the APC range from Akai Professional to see they have form in the performance and production controller space. While those controllers were more aimed at Ableton users, with Fire, the company have turned their attention to FL Studio users.

Billed as the first ever dedicated hardware controller for FL Studio (and launched only shortly after the release of FL Studio 20) Fire celebrates the highly-anticipated arrival of FL Studio to the Mac. 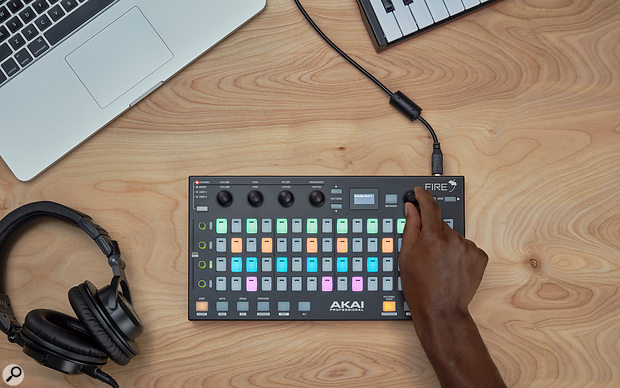 Fire is based around a 4x16 velocity-sensitive RGB pad matrix made to allow quick input of patterns on the Step Sequencer. It’s equally easy to switch over to Performance Mode for live playing and recording of notes and launching patterns. For mouse-free mixing in FL Studio, Fire includes four banks of four touch-capacitive knobs, enabling the user to instantly see and adjust parameter values.

Akai promise plug-and-play integration with FL Studio, and the possibility of expanding the system to up to four units, creating the potential for an 8 x 32 Matrix. The USB-powered controller also features a graphical OLED display and comes with FL Studio Fruity Fire Edition software. The software sports up to 500 tracks along with VST and DXi instrument support, full automation functionality, plus 18+ virtual instruments and over a dozen built-in effects and processors.

“We are extremely excited to be working with Image-Line,” said Dan Gill, Product Manager for Akai Professional. “The production power of FL Studio 20 combined with the hands-on hardware control Akai is known for makes for a powerhouse combo.”  Fire is available now and costs $199.99/€199.99/£175.