UK speaker company PMC have released two new mid-field monitors, the IB2 SA and IB2 XBDSA. Both share a 34mm soft-dome tweeter (the same as can be found in the BB5 XBD Active) and a 75mm fabric-dome mid-range driver, while the smaller IB2 SA carries a single 10-inch carbon fibre and Nomex piston woofer, and the IB2 XBDSA houses two. 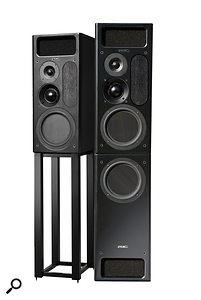 PMC IB2 SA & XBD SA.Speaker management on both models is provided by what PMC describe as “a new breed of ultra-low-distortion DSP”, while power comes courtesy of the built-in Class-D amplifiers (200W for the tweeters, another 200W for the mid-range drivers and 560W for each LF drive unit).

As you may have guessed from looking at the photo, the IB2 XBDSA is basically the same speaker as the IB2 SA, but with an extra sub cabinet underneath, and this subwoofer is available as a separate product, either to augment the bass response of a stereo monitoring system, or for use as an LFE speaker in surround setups.

The frequency response for both speakers is quoted as 20Hz to 25kHz (the advantage to the IB2 XBDSA, according to PMC, is its “ability to drive larger control rooms effortlessly”). No distortion figures were given, but the drivers used apparently reduce distortion to “insignificant levels”. The professional nature of these monitors should tell you that they won’t be cheap, and though no price was available at the time of writing, we suspect that they will fall squarely in the “if you have to ask, you can’t afford them” category. For more information, check out the PMC web site, below.