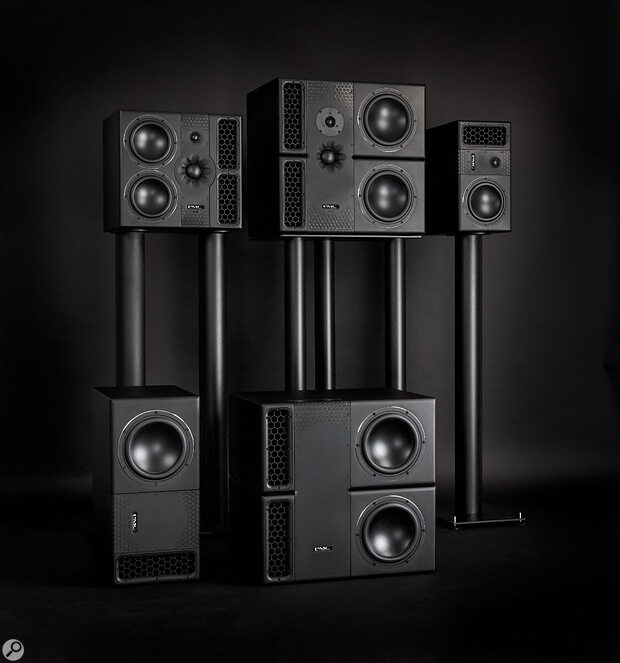 British monitor makers PMC have just announced a brand-new range of studio speakers. The PMC6, PMC6-2 and PMC8-2 replace the company's TwoTwo series speakers, and are said to offer the same 'sound signature' as PMC's top-end models like the IB2 and QB1.

As you'd expect from PMC, all these new monitors employ the company's proprietary Advanced Transmission Line bass loading. Of the newcomers, the PMC6 is the most conventional, being a two-way speaker that combines a high-excursion 6-inch bass driver with a one-inch, soft-dome tweeter. The unique honeycomb construction you can see at the transmission line exit is part of a PMC technology called 'Laminair', which is intended to eliminate turbulence.

Moving up in the range, the PMC6-2 doubles up on bass drivers, and also adds a two-inch soft-dome midrange driver. This mid driver is integrated using another PMC technology, the 'N-compass' waveguide, which is said to optimise its dispersion.

At the top of the new series is the PMC8-2, which its makers are touting as a midfield monitor rather than a nearfield. It follows the same three-way format as the PMC6-2, but with 8-inch rather than 6-inch drivers — an upgrade that means they're only 3dB down at 25Hz, which is remarkable!

In addition to these three full-range speakers, PMC have also announced a brace of subs. The PMC8 Sub and PMC8-2 Sub employ one and two 8-inch woofers, respectively, and are also transmission-line loaded.

All these new PMC monitors employ Class-D amplification throughout, and use DSP for crossover duties and driver alignment. They can thus be fed from either analogue or AES3 digital sources, and also benefit from user-operable room integration, via PMC's browser-based SoundAlign software. As well as integrating multiple speakers (and subs) and optimising their combined response, you can use SoundAlign to 'tell' the full-range speakers which orientation they're mounted in (portrait or landscape), after which the speaker's internal DSP will optimise its dispersion accordingly.

We've come to expect much from PMC, and our early listening tests reveal these new speakers to be something rather special indeed. Stay tuned for the full SOS review...