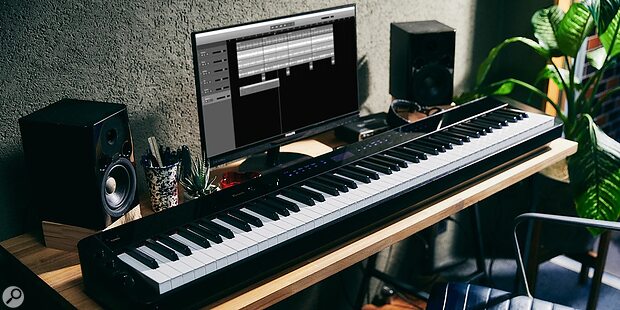 Casio's Privia range of digital pianos has just grown by two models: the PX-S1100 and PX-S3100. At just 232mm deep, they're being billed as the world's slimmest 88-note hammer action keyboards, which should lend them well to compact studio setups — as will their USB and Bluetooth MIDI connectivity.

Both new digital pianos feature a wealth of onboard sounds (700, in the case of the more upmarket PX-S3100), all based on Casio's established piano-modelling technology. They both also sport pedal input jacks, and their sound engines even model the mechanical pedal sounds. Impressively, given their size, both the PX-S1100 and PX-S3100 both feature a pair of built-in speakers, for standalone operation.

Perhaps most remarkable, though, is the price: the PX-S1100 and PX-S3100 are set to sell for just £615 and £839, respectively. Given its expanded sound set, and the inclusion of a mod wheel, the latter model will likely be of most interest to studio owners and composers. Click the URL below for more details.