Renowned professional monitor manufacturers PMC have launched a new design that promises to make some of the unique features found in their highly regarded reference monitors available at a much more accessible price. Described as a compact nearfield reference monitor, the new Result6 is a two-way active loudspeaker that combines digital and analogue design elements with two completely new drivers to create what is sure to be a highly anticipated addition to the range. 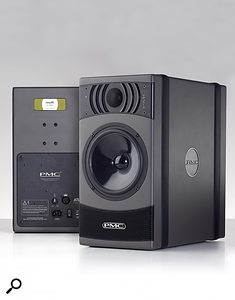 According to PMC, the Result6 is all about elegant simplicity. In contrast to many high-performance monitors, you won’t find an array of DSP controls or room adjustment options at the rear — just a balanced XLR input and a +/-10dB trim pot. Instead, PMC say the speaker is engineered to deliver a neutral, dependable reference sound. This might keep things nice and simple for the user, but some of the engineering involved is pretty sophisticated. Like all of PMC’s monitors, the Result6 features their proprietary Advanced Transmission Line (ATL). Like all transmission line designs, the ATL sends the problematic sound energy coming from the rear of the bass driver down a long and winding path inside the cabinet before releasing it from a port. What makes PMC’s version special is that, thanks to some devilishly complicated calculations involving the length and taper of this tunnel and the properties of the acoustic foam used to line it, only the lowest frequencies are allowed emerge from the front-facing port and they do so perfectly in phase with the main driver. As well as delivering deeper bass from a smaller cabinet, with the port effectively acting like an additional bass driver, the ATL removes harmonic distortion from the low frequencies that can mask upper bass and mid-range detail while providing consistent air pressure behind the woofer for better control and reduced excursion.

This core PMC technology is complemented by a custom-designed mid-range/bass driver, developed using laser-based measurement to accurately integrate it with the ATL, and a new 27mm soft-dome tweeter. The latter is covered by a dispersion grille and mounted inside a novel surround equipped with what PMC are calling diffraction fins. The aim here is to widen the speaker’s sweet spot by improving the off-axis response, while simultaneously blocking cabinet edge effects to prevent high-frequency smearing. The drivers are powered by separate 60W and 100W Class-D amplifiers that are said to be extremely efficient, with low distortion and a high damping factor. While the amps are digital, PMC have opted for a completely analogue crossover, designed specifically for this monitor and its drivers using circuit modelling techniques. The Result6 also incorporates “non-invasive” limiting circuitry to protect the drivers from accidental damage without, say PMC, affecting their performance.

The monitors are available now with a price tag of $2950 per pair, which is significantly less than the TwoTwo range, which starts at over $5000.