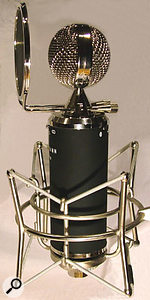 After becoming frustrated at spending large sums of money and time purchasing and maintaining vintage microphones, musician and producer Steve Bull decided to design and build his own, using a combination of modern technology and vintage design to realise his goal.

The result is the Newmann Retro, a microphone reminiscent of vintage ‘lollipop’ mics, which Steve claims has “tube warmth, clarity and character”, but which costs £495: “less than the cost of a service for a vintage mic”.

The Newmann Retro uses modern components and is assembled manually. Each mic is hand-tuned and supplied in a flightcase with a sturdy shockmount and a power supply. The mic has switches on the body to select the polar pattern (omni, figure-of-eight or cardioid), and also to engage a 10dB pad and a high-pass filter.

An integral pop-shield adds a classy touch, but is also a very practical addition when the mic is used with vocalists. For further information, head over to Newmann’s web site.