Roland have just announced three new exciting percussion products: two hardware drum machines, and a software recreation of one of their own classics.

Starting with the hardware, the larger of the two is the TR-06 Drumatix, an analogue-modelling replica of the much-loved 606, in much the same way as the TR-08 paid tribute to the 808. Aesthetically faithful to the original, it combines Roland's Analog Circuit Behaviour (ACB) technology for sound generation with a step sequencer that promises all the functionality of the original, plus a few neat bells and whistles. Extras include features like probabilistic triggering, ratcheting and step looping for modern glitchy effects, a built-in master bus compressor, and a global delay effect.

The TR-06 has a trigger input, letting you sync it to other sequencers, and also sports five trigger outputs, meaning you can use its sequencer to control modular synths and the like. Audio output is via stereo line or headphone output jacks, or you can send all its tracks to a computer via USB.

Finally, the TR-06 can be battery-operated, and features a built-in speaker for truly mobile music making.

If the TR-06 is a 'cover version' of the 606, then the new TR-6S is more of a 'greatest hits': its internal sounds include models of the 606, 707, 808 and 909 drum machines, plus an FM synthesizer and the ability to load custom samples. All these sound sources can be mixed and matched too, to create your own unique drum kit.

The TR-6S's sequencer is derived from that of the popular TR-8 and TR-8S and, like the TR-06, its audio and MIDI data can be streamed to a computer via USB. 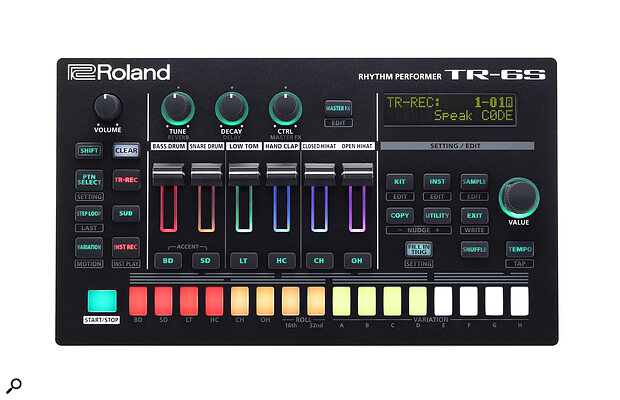 Last up is the software TR-606, a software instrument that grants access to accurately replicated 606 sounds straight from your DAW. That's available as part of the Roland Cloud VI collection, and features an expanded sequencer as well as modelled analogue saturation effects.

We'll be reviewing all of these exciting new instruments in an upcoming issue of Sound On Sound.