Paul Epworth takes Producer of the Year at MPG Awards 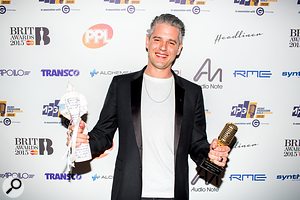 Paul Epworth with his MPG Award and BRITLast night saw the great and the good from the UK recording industry descend on the Park Plaza Riverbank Hotel in London for the annual Music Producers Guild Awards. Walking away with the top award was Paul Epworth, who won the Producer of the Year Award for 2015, the third time he's won the honour in the awards' seven-year history. As its recipient, he automatically received the 2015 BRIT Award for Best Producer, which was presented at the same time.

Paul has recorded numerous artists including Sir Paul McCartney, Adele, Florence and the Machine, Coldplay and John Legend and has been especially busy this last year at his newly renovated studio complex, The Church, which we recently visited. Watch the video on our YouTube channel.

The award for International Producer of the Year (sponsored by JHS and Lewitt) went to Dan Auerbach whose work with his own band, The Black Keys, as well as Lana Del Rey, and Ray Lamontagne earnt him the gong. Meanwhile, Tom Dalgety was also named Breakthrough Producer of the Year (Musicguard) for his in-your-face production of Brighton rock duo Royal Blood. 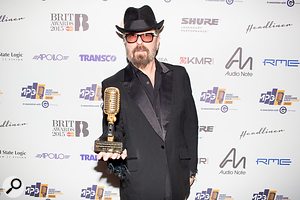 Stewart later took to the stage to entertain guests with a live performance. Among the artists joining him were young American singer Thomas Lindsey, with whom Stewart has recently recorded an album; 17 year old British newcomer Holly Stephenson, who is soon to release her first album produced by Dave Stewart, and The Lake Poets - aka Martin Longstaff - a multi-instrumentalist singer/songwriter from Sunderland.

Following his success at the Grammys, Sam Smith's 'Stay With Me' was also recognised with the UK Single Song Release of the Year Award, sponsored by Shure. The UK Album of the Year 2015, sponsored by Universal Audio, was 'Tales of Us' by Goldfrapp, beating releases from both Ed Sheeran and London Grammar. James Rutledge took home the Re-Mixer of the Year Award, presented by G-Technology, for his remixes of Manchester alternative band Everything Everything — two members of which took to the stage for his acceptance.

Studio of the Year (KMR Audio) went to RAK Studios, beating Abbey Road and AIR Studios; and the A&R Award (Prism Sound) went to Korda Marshall — the head of Infectious Music — whose signings include Temper Trap and Alt-J.