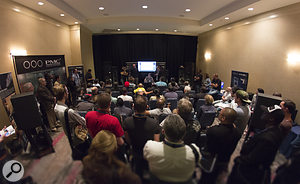 PMC's Masters of Audio sessions at AES New YorkHolding to a long-standing tradition, British reference monitor manufacturer PMC will be running their usual 'Masters of Audio' seminars at the forthcoming 135th AES Convention in New York from October 17-20, featuring élite members of the international audio industry. The seminars and workshops will take place in a dedicated audio demo suite equipped with PMC’s IB2 XBD-Actives and their recently launched twotwo nearfields.

Names confirmed to speak throughout the convention include the following:

• Former Def Jam engineer Young Guru (Jay-Z, Beyoncé, Rihanna, Alicia Keys) will be examining the recent emergence of a new generation of do-it-yourself engineers, and revealing what it takes to become one yourself. There will be plenty of time for questions at the end of the session, so this is a rare opportunity to put questions to the man himself.

• Legendary R&B, rock and hip-hop producer/engineer Jimmy 'The Senator' Douglass (Aretha Franklin, Led Zeppelin, The Rolling Stones, Timbaland, Aaliyah, Jay-Z) will be answering questions about his long career and presenting some of his latest projects, including Justin Timberlake's 20/20 Experience.

• Producer/mix engineer 'Bassy' Bob Brockman (Santana, P Diddy, Sting, The Fugees) will lead a 3D mixing workshop with reference to his own techniques for EQ, compression and placement.

• Engineering and mastering team Ronald Prent and Darcy Proper, also owners of Wisseloord Studios in Holland, will be auditioning surround recordings from singer/songwriter Lorie Lieberman's new album Bricks Against The Glass (recently released in high-resolution Blu Ray Audio format) and leading a Q&A session on its mixing and mastering.

• Multichannel/surround sound specialist and mixing/recording engineer Ulrike Schwartz will be answering questions on the recording and mixing of the Mariss Jansons Beethoven project — a series of orchestral recordings made at the instigation of the Latvian conductor last year with the Bavarian Radio Symphony. The aim: to record all of Beethoven's symphonies in a series of challenging sessions at the fabulous Suntory Hall in Tokyo. Of course, it wasn't quite as simple as it sounds…

• Finally, New York-based musician, mix engineer and producer Chris Tabron (Beyoncé, Robin Thicke, John Legend) will be talking session attendees through the most recent single he mixed for Beyoncé, as well as explaining his approach with reference to a cross-section of his engineering and mix work.

In addition, regular AES student listening critique sessions led by PMC staff will throw open the demo suite, so that the younger AES attendees may bring along their own mixes for auditioning and evaluation on the high-resolution IB2 XBD-A and nearfield twotwo monitors.

For more information on all of these sessions, check out the AES events calendar at:www.aes.org/events/135/calendar/calendar.cfm (hover over the coloured bars representing thePMC seminars in the 'Knowledge Center' for more information). Alternatively, come to the PMCstand (Booth #3222) or direct to the dedicated suite in the AES Knowledge Center, Room 1E06 at the Javits Center (opposite the Special Events Hall) during AES.