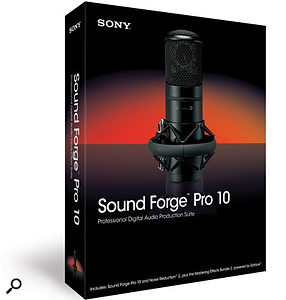 The latest incarnation of Sony’s PC-based audio editing software, Sound Forge, has been released, strengthening its powerful feature set. Unlike a DAW — which is designed for multitrack editing — Sound Forge aids the user in fine-tuning individual audio files to purpose; for example, EQ’ing a song before cutting to vinyl. This update contains some interesting new features, as well as a few more practical ones.

Sony had already made themselves a strong ally for their v9 release in the form of Izotope, the creators of the well-recieved Ozone 4 (reviewed SOS July 2009) mastering suite. Sound Forge 10 includes Izotope’s SRC sample-rate conversion and MBIT+ dithering systems, as well as a stripped-down version of all six parts of Ozone 4 (there were only four Izotope plug-ins in Sound Forge 9). Also new to the package is DAO (disc-at-once) burning, allowing the user to create a Red Book-compliant standard audio CD without using separate CD editing and burning software. The inclusion of these processors and tools, in an already solid piece of editing software, makes Sound Forge an attractive option for anyone wanting to master their own material on a relatively tight budget.

Support for several instrument file-formats has also been added, with DLS, Soundfont 2 and Gigastudio formats now editable. Anyone using these formats can alter individual parts of a patch and re-save it without any format conversion. Other new features include a Direct X release of the Zplane Elastique Pro time-stretch algorithm, as well as GUI updates. These include tabbed file browsing, window docks (which appear to be similar in function to those in Adobe’s Creative Suite), and savable layouts, all of which should make working with all of the new tools a little easier on the eye.

Sound Forge Pro costs £309 to download in the UK, with a boxed version shipping soon.