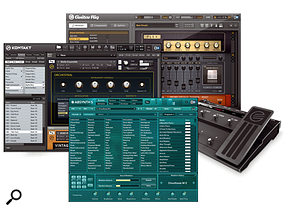 Fans of Native Instruments (NI) will be spoilt for choice, with four NI software packages — Kontakt, Absynth, Guitar Rig and Komplete — all receiving big updates. Kontakt, in particular, appears to have undergone some significant changes for the version four release. A new compression format called NCW losslessly reduces sample size by up to 50 percent, with samples decompressing upon playback; this technology is intended to reduce hard-disk load during high-polyphony playback situations. The playback engine has also been updated, now including Authentic Expression Technology (AET). NI claim that AET will enable “seamless transformation between the spectral characteristics of different sounds, achieved via a phase-corrected convolution technique based on FFT analysis of the original sample”. In practice this should result realistic and expressive playback of sample libraries, as well as enabling some bizarre and creative sound-blending applications.

Absynth, NI’s complex and powerful sound-design synth, has reached v5, gaining some new toys for tweak-heads, including the Supercomb Filter and the amusingly-named Mutator. The former introduces physical modelling-stlye filtration, adding acoustic resonance to a patch, whilst the Mutator allows the user to enter the brand-new sound browser and, specifying attributes from other patches, bend the current patch toward an existing one. The new Cloud Filter and Aetherizer both provide granular-style effects, with the former being more traditional and the latter opening up experimental possibilities.

Guitarists will welcome the new additions in NI’s Guitar Rig 4 Pro virtual amp software, with two new amps, two additional delays and two new reverbs to choose from when building virtual setups. NI have also overhauled the speaker and microphone emulation sections of the programme, and have introduced a new Control Room module, which enables precise mixing of up to eight phase-aligned mics aimed at any one virtual cabinet. As in previous versions, guitarists can also use the Foot Kontrol pedal to change patches, switch effects and apply wah-wah-style expression, in much the same manner as with a traditional hardware multi-effects pedal.

If you just can’t make your mind up which programmes you’d like, the Komplete bundle has now been upgraded to version six, including the three updated programmes mentioned here (though with no footpedal controller for Guitar Rig 4 Pro), as well as the Battery 3 drum sampler, the FM8 FM synth, NI’s powerhouse  lead and bass synth Massive and the Reaktor 5 modular synthesis tool. It should be noted that four software instruments have been discontinued; Akoustik Piano, the B3 drawbar organ, the Pro-53 Prophet emulation and Bandstand are no longer available as individual products. NI do point out, however, that the Elektrik Piano samples are now included in the new Kontakt 4 library.

Komplete retails at £412 in the UK, with an upgrade option available for £123; Kontakt 4 costs £312, while Guitar Rig 4 Pro is £330 including the Foot Kontrol. Absynth costs £175, and upgrade options are available for each of the stand-alone applications.